Ramsay says he could quit in two years for football

GORDON Ramsay has revealed he could quit the kitchen in two years’ time to make a return to football.

The chef tweeted that his last ambition was to win three Michelin Stars in the home of gastronomy – France.

After that, Ramsay said football management could be on the cards. And given his fiery temper, Ramsay, 49, could give Sir Alex Ferguson a run for his money in the “hair dryer” stakes.

Making the comments during an interview for travel magazine Silverkris today (TUE) he said: “I may retire in two years. I have one ambition left and that’s to win three Michelin stars in France, which we have a huge push for this year.”

And while retweeting the story on his Twitter page he added: “I might go back to football in two years time…Management.”

Scots-born Ramsay, who was signed to Rangers FC at 15, was forced to quit the sport after suffering a number of injuries including injuring his knee and smashing the cartilage during a training session.

After he received Michelin stars for the third time, for Amaryllis in Glasgow in 2002, he said that “without the upset at Ibrox, I would not be the chef I am today”.

At present the top TV chef holds 14 Michelin star restaurants and has been awarded 16.

Ramsay’s revelation over his new career goal has sparked dozens of messages from fans speculating which football team he could manage.

Dave Thackeray wrote: “Chelski would take you right now in a heartbeat.”

And Mark Gibson wrote: “Will end up managing NUFC at some point soon.”

One fan even suggested that Ramsay sticks to the culinary theme and sets up a chef’s football team.

Dave Watts wrote: “Why don’t you try and set up a chef’s footy team called the Takeaways?” 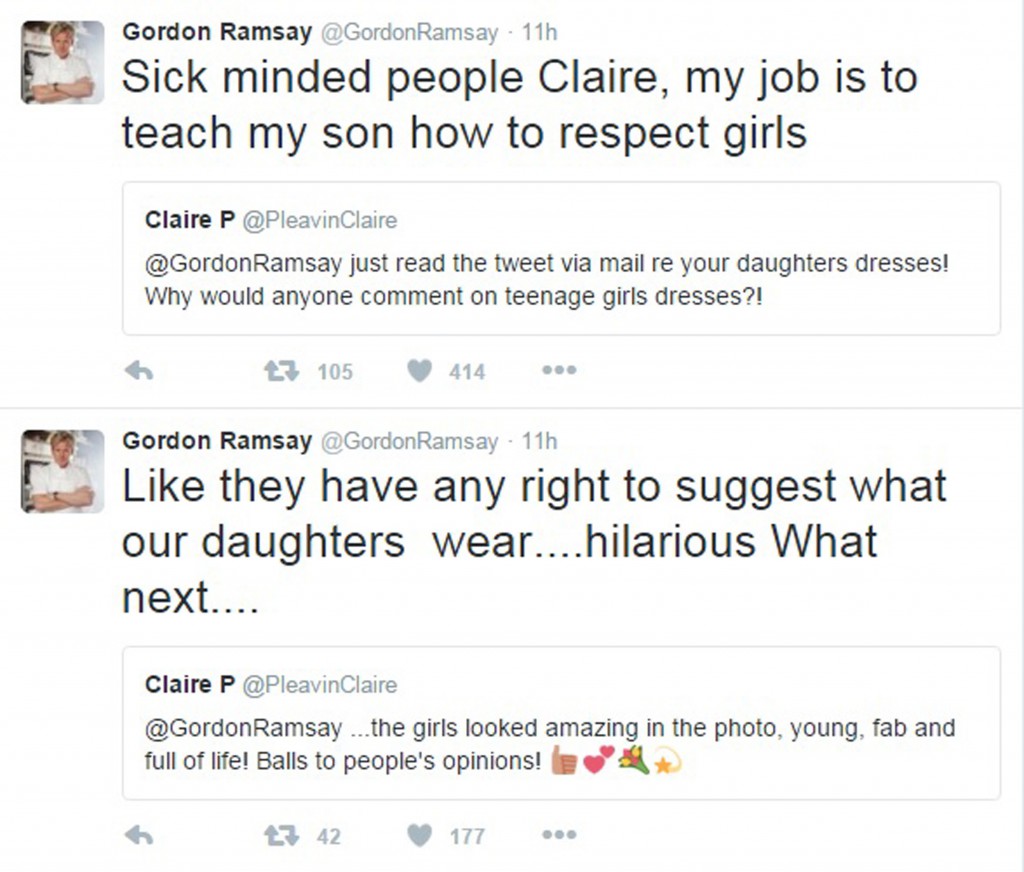 Almost immediately after posting the image, the proud dad was bombarded with comments criticising how the girls were dressed with dozens of fans saying that the girls were “dressed like hoochies” – slang for a promiscuous young woman.

The Hell’s kitchen star responded to a fan on Twitter saying, “Like they have any right to suggest what our daughters wear. Hilarious. What next.”

And when asked by a fan why anyone would comment on how his kids dressed, he responded: “Sick minded people, my job is to teach my son how to respect girls”, before going on to write it’s a “father’s duty” to do so.