Stubbs took heart from what he believed was a better display on a pulsating night when Jason Cummings’ double was cancelled out by the 10-man Bairns with two goals in the final four minutes. 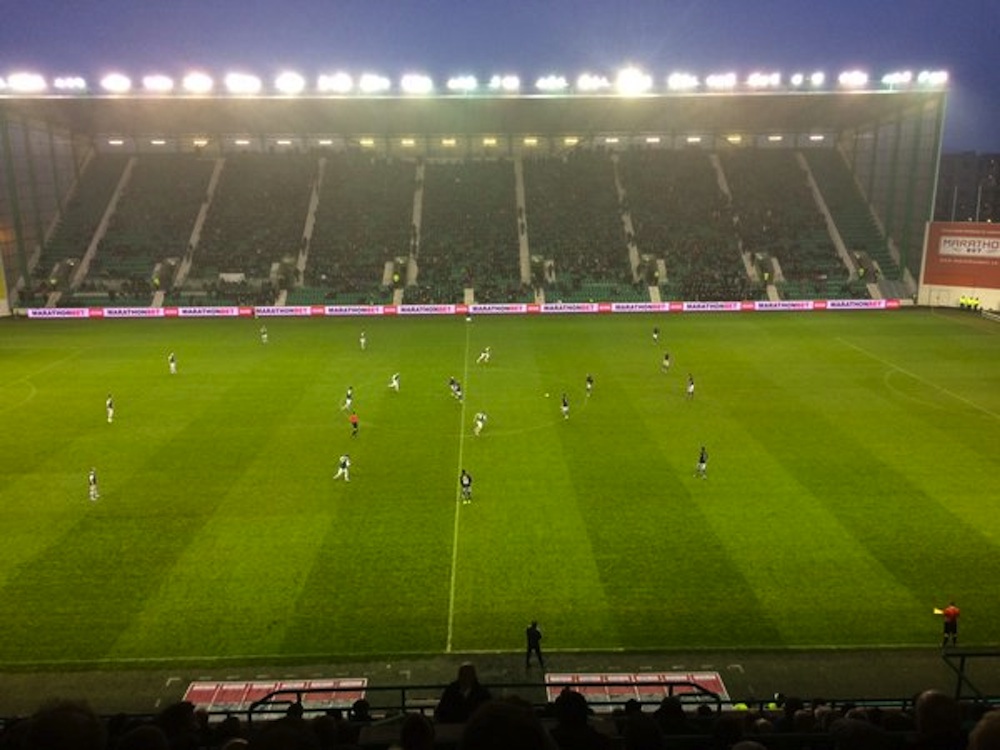 It leaves Falkirk where they want to be in the race for second spot with just two matches remaining – holding a six-point lead and eight-goal advantage over their rivals, who have two games in hand.

Stubbs has confessed his team, who have registered just one win in their last eight league matches, must now find four consecutive victories from their final four league matches if they are to have any chance of overcoming Falkirk.

“Realistically, we’ve got to win them all but we were looking at that anyway, even before the game.

“So, celebrations are for the middle of May, not for tonight. There’s a lot of football to be played yet.”

That last comment appeared a sideswipe at Falkirk, who could not be denied their raucous celebrations at the full-time whistle.

The Bairns began impressively but Hibs were on top as soon as Cummings booted in David McCracken’s misplaced header back to keeper Danny Rogers after just nine minutes.

Yet, as recent wins over Rangers and St Mirren have proved, this Falkirk outfit do not know when they are beaten and, despite Aaron Muirhead’s late red card and Cummings’ controversial penalty with just nine minutes to go, headers from McCracken and substitute Bob McHugh maintained the Bairns’ lead in the table.

Stubbs now has a mountainous task in lifting his team for Saturday’s Scottish Cup semi-final with Dundee United but grasped at the positives when he finally faced the media an hour after the full-time whistle.

“First of all, it was a marked improvement, in terms of performance, from recent weeks,” he claimed. “For 85 minutes, we were good and then we’ve shot ourselves in the foot with two lapses in concentration, really.

“That’s the disappointing thing, because they put a lot of effort into the game and I thought that was much more like us than what we’ve been showing. It was more like us from early in the season.

“If you look at the game for 85 minutes we’ve played very well and I and the players should be talking about three points. Unfortunately they haven’t got what they deserved.”

Houston is not normally one for betraying his emotions but the Falkirk manager’s reaction to his side’s sensational rally, celebrating in front of the delirious and noisy away support, was a clear indication of how important he thinks their draw could prove.

“It just sums up the character of the players this season. We’re never beaten.

“We were down to 10 men but we brought on young Kevin O’Hara and had three strikers on the pitch, so we finished the game in a 4-2-3 formation, in many ways.

“There’s no point in losing 2-1. I’m a great believer if you’re down to 10 men and you get something to get back into it then just go for it. And there’s the rewards.”