However, the big defender is bracing himself for a Blue Brazil backlash at Central Park this afternoon.

The Glasgow amateurs stunned Cowden after just 25 seconds of their playoff semi final, with Chris Duggan putting the finishing touch to a slick move straight from kick-off. 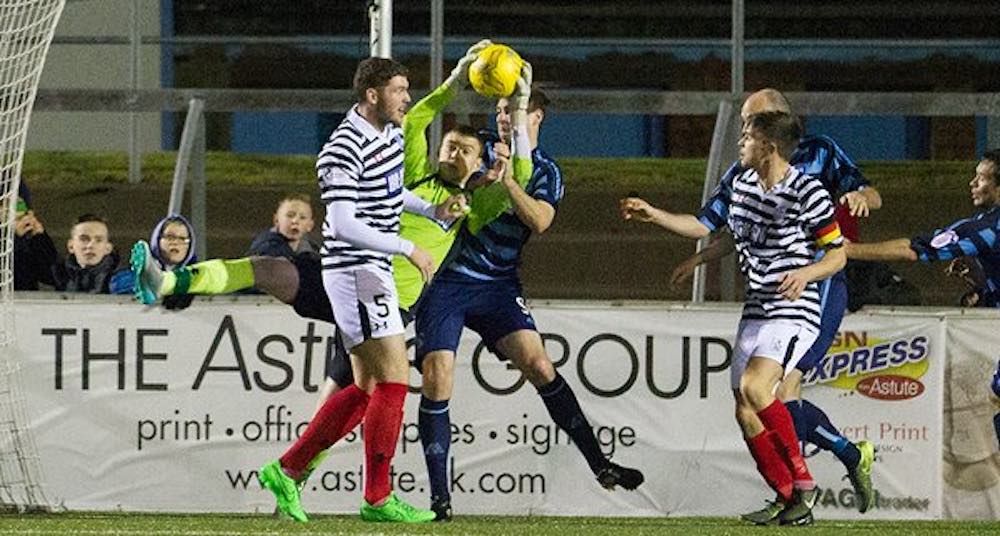 McGeever believes the Fifers, who are now staring relegation in the face, got the fright of their lives after expecting to face route one opposition. Queen’s Park went on to claim a 2-0 win to take to Fife.

He said: “The surface at Hampden the other night was magnificent and I think it came as a shock to them just how much we passed the ball. They maybe thought, because we were in the league below, that we would go a bit direct.

“But within 25 seconds we had played it along the back, a lovely wee turn by Sean Burns and Chris Duggan scores. That gave them a fright, you could see them going ‘these boys are no mugs’.

“Maybe they underestimated us, and you can combine that with the fact all the pressure is on them. They are the team in the division above and are expected to come through. We have nothing to lose.

“Cowdenbeath will maybe be a bit more up for the game that they were on Wednesday night, given we’ve shown what we are all about and what we are capable of.

“The only disappointment from the other night is we feel like we should be going into it with a bigger lead.”

The onus is now on Colin NIsh’s men to attack from the first whistle in front of their own fans – on a surface described as “terrible” by their own club captain, Dean Brett.

And, after impressing with a slick, passing display in midweek, McGeever is ready to get ugly if necessary to fend off a Cowden comeback.

He continued: “It will be a different game at Central Park, it will be a battle, but we have been to places where we have had to defend for our lives for a result this season, and we are more than capable of that type of performance.

“They will need to chase the game and that could suit us, but I’ve played at Central Park before – I know it’s tight and I’ve heard the surface isn’t the best at the moment. We’ll just need to use whatever tools are required to finish the job.

“I’m certain there will be goals in this game – and the first one is going to be absolutely massive.”

Queen’s Park became one of the few sides to shackle 18-goal Cowdenbeath striker Greig Spence, a nominee for League 1 player of the year, this term with their 2-0 win on Wednesday.

He added: “I know a few boys that have played with him and they gave me a wee warning and a bit of advice, so we knew what to expect. Iain Flannigan, a mate of mine, was at Alloa with Greig, so that was a help!

“He didn’t cause us too many problems on Wednesday but you could see with his touches and movement that he is a really clever player. You wouldn’t be up for PFA player of the year if you didn’t have plenty of quality.

“The job isn’t done yet, he could pop up at any point and be a big player in this tie, so we’ll need to be on our mettle.”

Hibs ace Josh Doig ‘looks like he has played 100 games’