Hearts striker Conor Sammon has promised that Robbie Neilson’s side will be better prepared for the Europa League return leg after stumbling to an unconvincing win over Infonet on Thursday.

The Edinburgh club will take a 2-1 lead to Estonia for next Wednesday’s first qualifying round second leg after coming from behind to beat the Tallinn club.

After Jegveni Harin netted a specular volley, Hearts turned the game around before half-time with a Prince Buaben penalty and Andrei Kalimullin own goal. 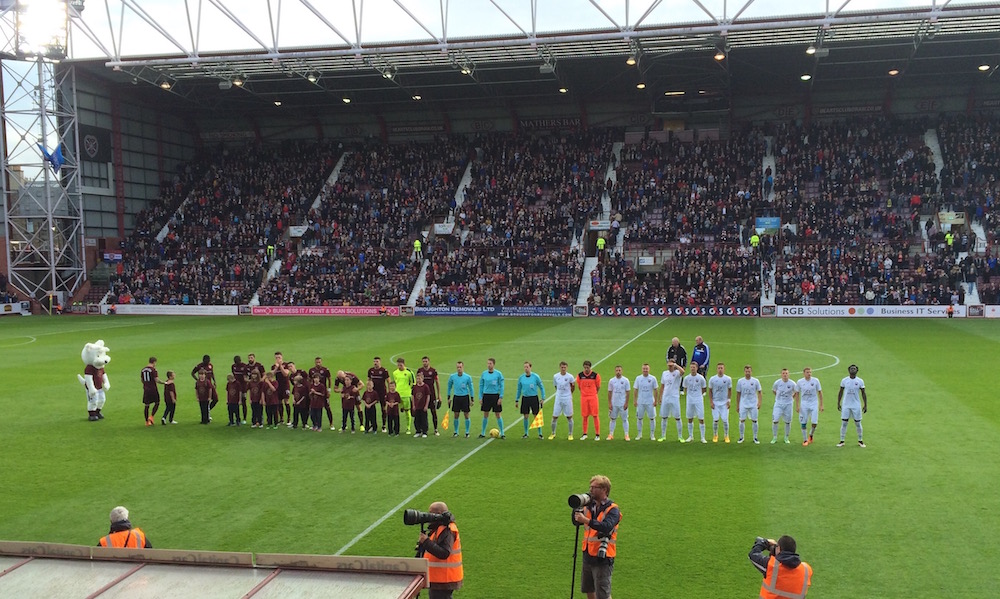 Head coach Robbie Neilson admitted that his side looked rusty against a team that have already played 17 domestic league matches, but new marksman Sammon is adamant they will deliver an improved performance to reach the second round.

He said: ‘We can improve. We take the positives, we came back from a goal down to win 2-1.

“We have stay together, it’s very early stages in the season and we’ll look to build upon the result.

“When you get 90 minutes under your belt, it really does help. You can do all the running and high intensity training, but nothing fully prepares for you being in thick of it, under the floodlights, in a competitive game like that.

“So that will stand us in good stead. We’ll get some recovery and then some more good sessions before we travel over there.

“I’d like to think we’ll keep growing physically and fitness-wise with each 90 minutes we play.

“We are an ambitious group of players who are not just happy to be involved in the Europa League, we want to be successful.

“We got the win from this first leg, even if we would have liked it to be by a few more goals with the way the game unfolded.”

Sammon and left-back Faycal Rherras made their competitive debuts against Infonet after joining earlier this summer.

Former Kilmarnock, Wigan and Derby marksman Sammon insists it will also take time for the new recruits to settle.

He said: “That is a huge thing. There are a couple of new players, including myself, and it does take time.

“In training, you can create the relationships but it is games where you are really tested and where you find out about your team-mates’ strengths.

“I’m sure it will take a little bit of time but it is something I am excited about. I know we have got really good players out there who can help me and vice versa.”

Sammon admits he loved every minute of playing at Tynecastle for the first time as a Hearts player.

He added: “It was brilliant, a brilliant atmosphere. It was amazing that more than 14,000 fans attended the game.

“It just shows the passion and pride the fans have for the club – and how excited they are about being in European competition.

“Even from my experience of Scottish football five or six years back, the Hearts fans were always up there with the best in terms of supporting their team.

“Tynecastle as a stadium must have one of the best atmospheres in the league.

“It was nice to hear that roar on Thursday night and, on a personal level, I am really keen to keep improving and hit the ground running here.

“I want to repay the fans – and the manager who has shown a lot of faith in me.”