GRANT HOLT cut an exasperated figure despite Hibernian’s return to the summit of the Championship after claiming his side were denied three clear penalty kicks against Raith Rovers.

Holt, 35, was involved in a breathless tussle with the Rovers back-line all afternoon on Saturday, going toe-to-toe with Kyle Benedictus, Jean-Yves M’Voto and Iain Davidson in a series of bruising clashes.

While the Norwich City legend has made a career of being able to handle the rough stuff, he is adamant that went too far when he appeared to be hauled to the ground by Davidson on two occasions in the second period. 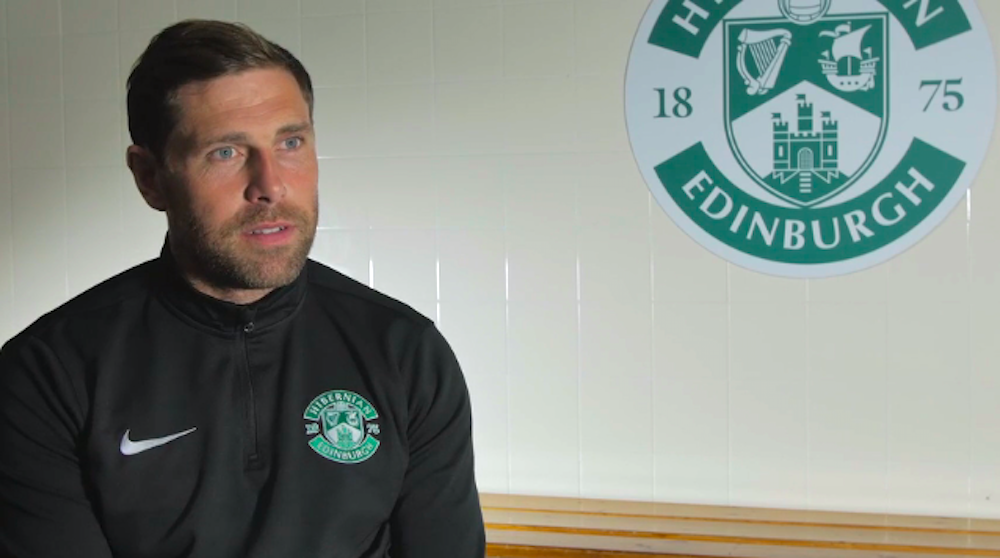 M’Voto then appeared to handle the ball in the box when defending a long throw, exacerbating the sense of frustration which was already at fever-pitch following Marvin Bartley’s contentious red card for allegedly kicking out at Bobby Barr.

“I’ve got a linesman kept telling me he couldn’t see me getting pulled over in the box – that’s his job to get an angle to see what’s going on!” said Holt. “Twice he’s managed to miss that.

“There’s a handball, I glance it on from a long throw hits the lad’s [M’Voto] hand and he gives a foul against me

“I can handle myself but if you go into the box and someone has got two arms around you and the linesman, who only has one job on the pitch, tells you he can’t see it . . . that’s another thing.”

Prior to the contest exploding into a series of controversies, Hibs came closest to opening the scoring when Holt manufactured a yard of space in the box, only to see his goal-bound effort blocked by M’Voto.

From the resulting Keatings corner Paul Hanlon rattled the cross-bar.

But a watchable contest was derailed on the cusp of half-time when Bartley was given his marching orders by Finnie and, a month after seeing red against Ayr, made the lonely walk for an early bath again.

“How many times are we going to have stupid sending offs for no reason? We’ve had three sending offs in last five games tells you everything you need to know about the luck we are getting at the moment,” added Holt.

However, Barr hit back: “The boy [Bartley] has just kicked me. I went for a tackle, the ball broke away and Bartley has just booted me. I didn’t make a meal of it and you can’t argue with the ref.”

Aside from providing an unsightly stramash prior to the break, Bartley’s dismissal also robbed the match of the decent ebb and flow it possessed in the first-half.

By contrast, the second period was attritional and spiky. There was plenty of endeavour and aggression, but little in the way of goal-mouth action, barring Hibs’ trio of vociferous penalty claims.

Holt, however, saw enough from the 90 minutes to strengthen his conviction that Hibs will soon end their winless streak, and do so in style.

“Even with ten men, we dominated the whole game,” added Holt. “Someone is going to take a real hammering off us – and I’ll feel sorry for the team that gets it.”