Tynecastle is “our house” and we don’t want Celtic to have a party, insists Hearts ace Isma Goncalves

ISMA GONCALVES announced himself to Scottish football by wrecking Celtic’s dream of a Treble – and the Hearts ace has vowed to crash another Hoops party.

The 25-year-old joined St Mirren on loan in January 2013 and was immediately thrown in at the deep end, starring in the Buddies’ League Cup semi-final win against the Hoops.

He took just seven minutes to find the net in a memorable 3-2 triumph. It proved to be the only domestic trophy Celtic did not win in the 2012/13 campaign.

The Glasgow giants have glory in their sights again on Sunday, with Brendan Rodgers’ side knowing a win will guarantee them the title – providing Aberdeen have not already handed them the crown by failing to beat Dundee on Friday night.

While it is a case of when, not if, Celtic make six-in-a-row, Goncalves has no intention of being subjected to “a party in our house”.

The Portuguese striker said: “Celtic win the league at Tynecastle? We don’t want that to happen.

“We don’t want them to have a party in our house. We are going to do everything to be the first team to beat them.

“Any time you play Celtic, it is normal you will be underdogs, but it is not impossible to beat them. I did it already with St Mirren so I think we can make it happen Hearts.

“I won in my first game in Scotland against Celtic and hopefully we can do it again. That semi-final was an amazing day. We worked a lot on Celtic and how they would play and we made it difficult for them. Everything we worked on in trained, we did in the game.

“The same at Hearts – when we are on our day, we can beat them. We have prepared well and everything we do in training is about how we can stop them and beat them. Hopefully we can show that on the pitch.”

All eyes may be on Celtic’s potential coronation, but Goncalves is acutely aware of the importance of the encounter to Hearts’ European hopes.

The Jambos have claimed just five wins from Ian Cathro’s 17 games in charge and have slipped to fifth spot, behind St Johnstone.

However, Goncalves is adamant they can secure continental competition and reckons there is no reason they cannot hit the heights of their 4-1 win against Rangers in February when Celtic come to town.

He continued: “There are nine games so I think we can make it. That’s our target.

“The players who came here in January are getting used to things and we are getting better. I think we can achieve it. If Celtic, Aberdeen or Rangers win the Cup then fourth place gets into Europe so we can make it happen.

“We showed it against Rangers – if we are on a good day, we can do amazing things.”

Goncalves was speaking as the Premiership trophy arrived early in Gorgie as part of the SPFL Trust’s ‘Trusted Trophy Tour’, with Hearts representing the first leg of a countrywide series of events showcasing community work carried out by Scottish clubs.

At present, the SPFL Trust and Scotland’s 42 league clubs engage with 710,000 supporters through their initiative. They hope to see this number rise to one million by 2022. 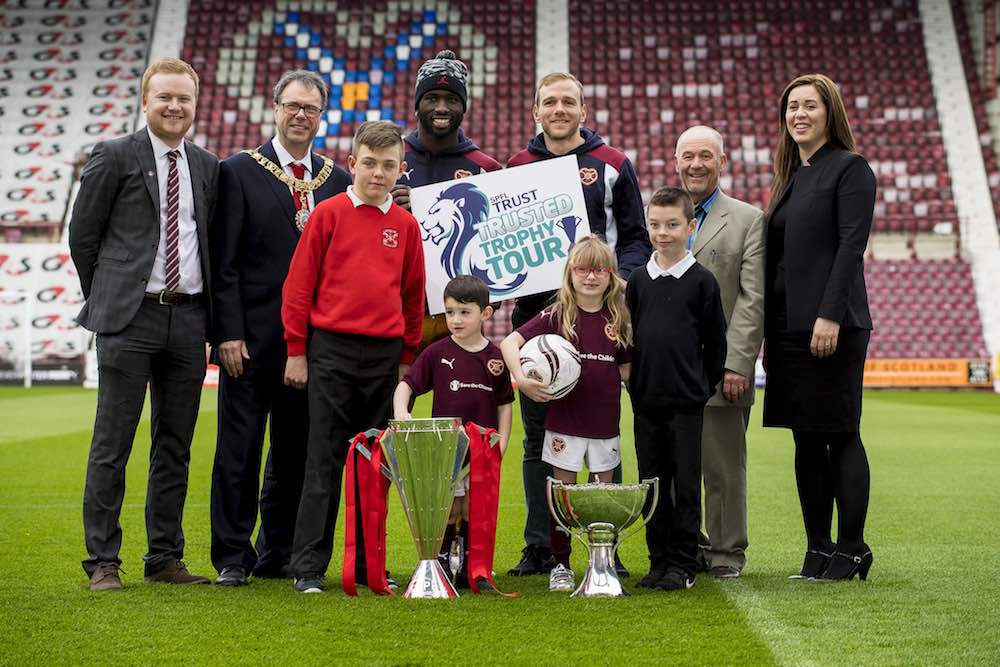