A DISABLED woman’s wedding anniversary was ruined after the wheelchair lifts on two coaches broke – leaving her stranded for almost seven hours.
Vanessa Gallagher missed dinner and most of her theatre show and was publicly humiliated after the lifts on Stagecoach coaches failed on the outward and return trips.
At one point, Vanessa and her wheelchair had to be physically lifted from the coach.
Vanessa, 46, had been looking forward to celebrating her 12th wedding anniversary with husband Jimmy by watching Lord of the Dance – Dangerous Games at the Edinburgh Playhouse.
The couple, from Dunfermline, Fife, had planned to follow that with a meal.
Vanessa and Jimmy, 56, boarded the Stagecoach vehicle at a park and ride near Dunfermline on Saturday afternoon.
But on arriving at Edinburgh, Vanessa was stuck on the coach for half an hour because the wheelchair lift kept jamming.
The delay meant she and Jimmy missed most of the show, for which they had paid £40 each.
At the end of the performance, Vanessa was too tired to go for dinner and decided to head home.
Even worse was to follow as she boarded the bus at 5.10pm only for the lift on another Stagecoach vehicle to break down, meaning the journey could not start.
At 6.30pm, the other passengers were taken off and at 7.10 an engineer arrived but could not fix the problem. At 7.40 the fire brigade was summoned to carry Vanessa and her wheelchair from the vehicle.
Stagecoach eventually arranged for a taxi to take the couple home but this did not arrive until 10. 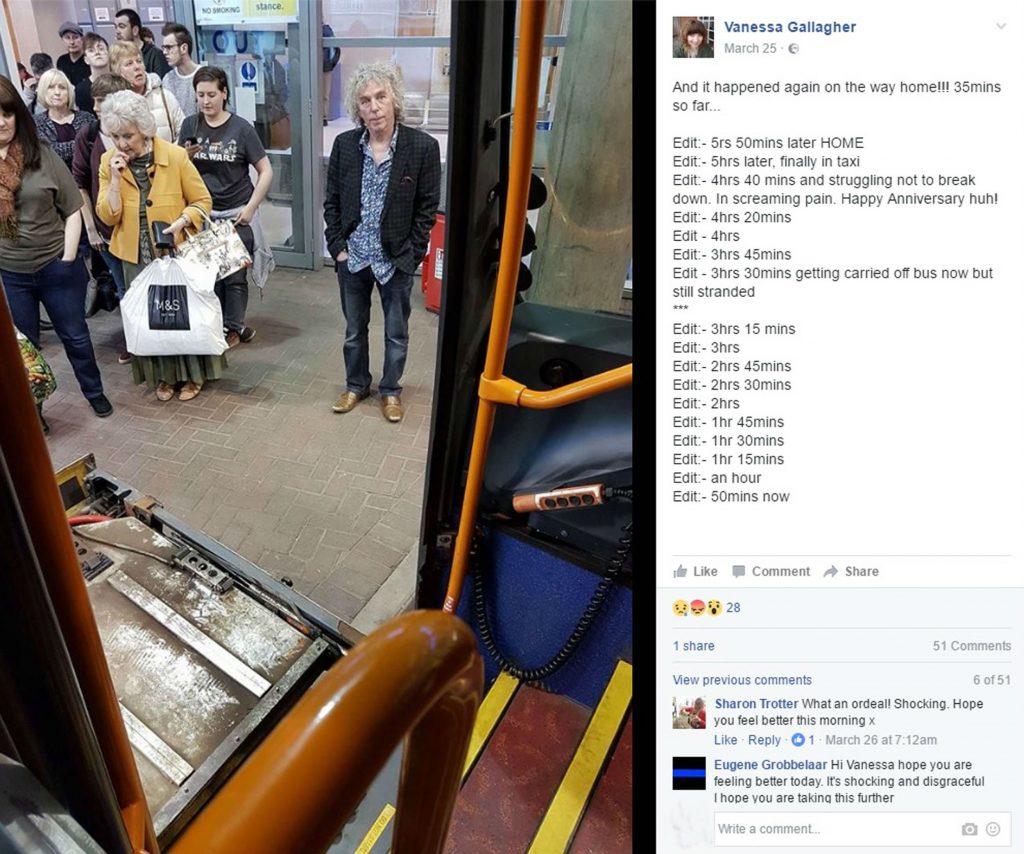 Jimmy filmed his wife being carried off the coach by firefighters, commenting: “Any dignity she had, she has lost it.”
But he added on a lighter note: “But she’s with firemen so she’s loving it – it’s an anniversary we will not forget.”
Writing on Facebook, Vanessa said: “Some women get flowers. I got swept off my feet by men in uniform; cradled by hunky firemen no less.
“But silver lining aside, this was one upsetting, humiliating, distressing, degrading and painful anniversary present I could have done without.
“So all in all, around SEVEN hours (including the earlier problem on arrival) of pain, exhaustion and humiliation due to faulty access lifts on your buses.”
She added: “And that’s not including the knock-on effects on my body which I am still struggling with and, given experience, expect to be for some time. Happy Anniversary huh.”
Speaking today (thu) about the humiliating experience, Vanessa added: “It happens all the time. I just want to highlight how difficult these things are for people with disabilities.
“I don’t get out much because of my disability but I hope when we go back through the experience is a bit better.”
Vanessa said the mechanical shortcomings of Stagecoach vehicles aside, the incident brought out the best in everyone.
She said: “The Playhouse staff were amazing.
“There were people on the bus back who had travelled through as well to see it, telling us what happened.
“Everyone was so kind. The driver couldn’t have been nicer. He was so sweet and supportive but I think he was a bit embarrassed it wouldn’t work.”
A spokesman for Stagecoach said: “We are very sorry for the impact this incident had on Mrs Gallagher’s journeys and day out.
“Our wheelchair lifts are checked daily prior to the first use and all our vehicles are subject to a strict maintenance regime.
“The vehicle involved had passed all necessary checks undertaken on Saturday.
“However, the coach suffered a mechanical fault with the wheelchair lift prior to a journey from Edinburgh to Dunfermline on Saturday.
“We are looking into the cause of the mechanical fault.
“We have been in direct contact with Mrs Gallagher to apologise and express our extreme disappointment that we were unable to provide a positive journey experience for her on this occasion, as this does not reflect the majority of journeys for passengers with a disability which run smoothly.”
Share
Facebook
Twitter
Pinterest
WhatsApp
Linkedin
Previous articleEdinburgh City confirm groundshare with city neighbours Spartans during renovation of Meadowbank
Next articleRangers legend Lovenkrands reckons bizarre Ronaldo airport statue looks like him