RANGERS legend Peter Lovenkrands has had a cheeky dig at a new statue dedicated to superstar Cristiano Ronaldo.
A strange statue was unveiled yesterday (WED) of the Real Madrid star on the Portuguese island of Madeira where the 32-year-old grew up.
The bizarre bust was revealed at a ceremony attended by Portugal’s president as the island’s airport was named after Ronaldo but the statue bared little resemblance to the footballer. 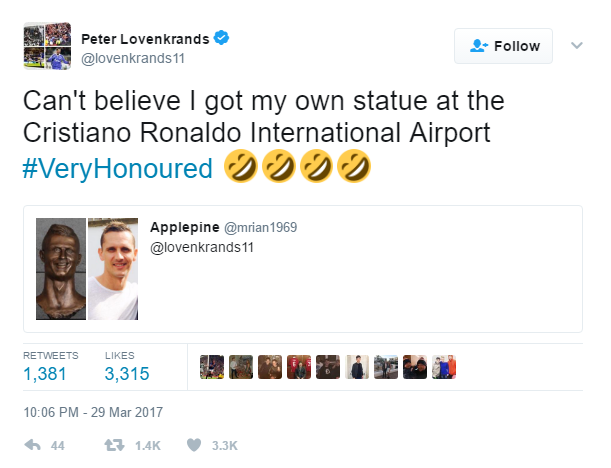 Social media was awash with jokes about what it actually looked like, with some suggesting Irish striker Niall Quinn and others saying it looked like the head from the TV programme ‘Art Attack’.
Now, former Rangers winger Lovenkrands has become the latest star to poke fun at the statue by suggesting it looks more like him.
The Dane shared an image of himself alongside the statue on Twitter yesterday (WED) with the caption: “Can’t believe I got my own statue at the Cristiano Ronaldo International Airport #VeryHonoured.”
His hilarious post was retweeted over 1,400 times with a further 3,365 likes.
Twitter users were quick to give their own reactions to his tweet.
Joanne Bennett wrote: “You’re still better looking than both of them.”
Claire Innes commented: “Ronaldo paying homage to his hero.”
Jodie McNair joked: “Wow uncanny. They may as well just change the name now and go with it.”
Whilst Marjory Young added: “Haha, saw that this morning and thought of you. You look much better than him and you’re a blue nose.”
Peter Lovenkrands played for Rangers between 2000 and 2006.
The former Danish international made over 100 appearances for the Ibrox club and scored a famous last-minute winner in the 2002 Scottish Cup Final against Celtic.
Ronaldo isn’t the only football star to have his hometown’s airport named after him. In 2006, Belfast Airport was named after former Manchester United star George Best.
Share
Facebook
Twitter
Pinterest
WhatsApp
Linkedin
Previous articleDisabled woman’s wedding anniversary ruined after lifts fail on two coaches
Next articleRussell Brand finally finds an MP he’d vote for – SNP firebrand Mhairi Black