NEIL LENNON has branded the ugly melee that marred Hibs’ explosive clash with Morton as ’20 times worse’ than his bust-up with Ally McCoist in the Old Firm ‘shame game’.

In an astonishing rant, the angry Hibs boss has accused Cappielow counterpart Jim Duffy of making light of ‘a very serious incident’ in the final minutes of Wednesday’s goalless draw.

Lennon insists there was venom, intent and aggression in the way Duffy and his backroom team confronted him in the wake of the reckless challenge from Kudus Oyenuga that sparked the brawl.

Revealing he had been left the angriest he had ever felt in his time in football, Lennon admitted he had lost respect for Duffy and believes Ton number two Craig McPherson should face SFA action, accusing him of ‘trying to swing punches’.

Lennon is adamant he has no regrets over his own behaviour, during which he had to be restrained by his own players, and claims he would have been ‘nailed to the cross’ had he acted like Duffy did.

And, with his opposite number maintaining in his statement that he did not ask Lennon for a ‘square go’, the Easter Road head coach has insisted he used the phrase ‘euphemistically’ – but is in no doubt that Duffy ‘wanted a fight’.

“’The referee was going to send him off anyway.’ Is he a mind reader? I wasn’t aware of that and I was standing closest to it.

“’I’m sure Neil will say the same, it was just emotion.’ ‘No Neil won’t say the same. I totally disagree with it. It was disgraceful behaviour. 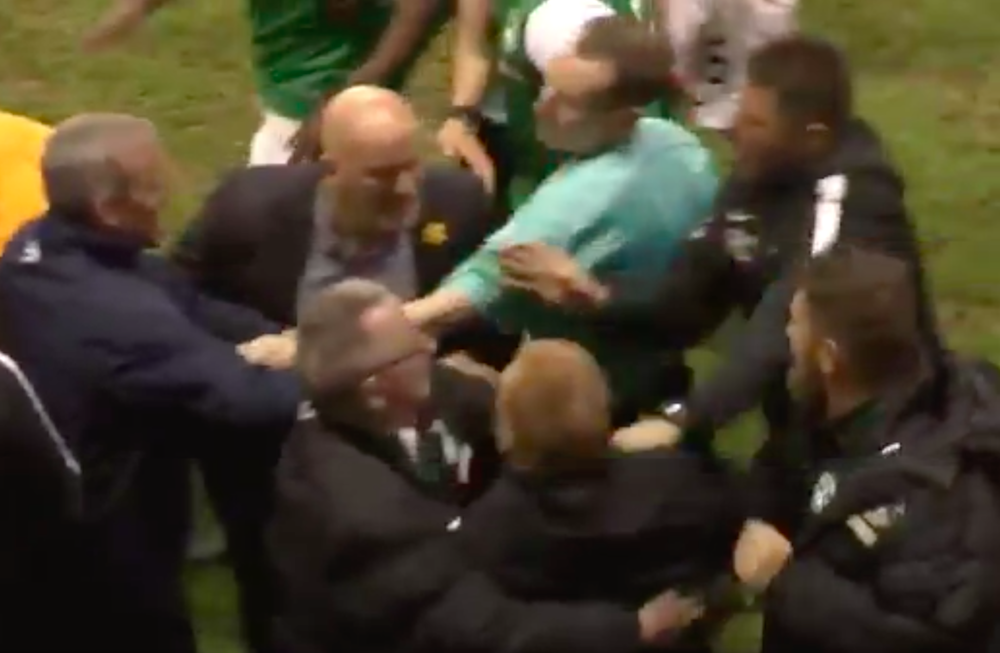 “’Sometimes you have to stand your ground for your team.’ Why? Why? There was no Morton player injured. What did I do? What did I do?

“Their staff came over and confronted me. Confronting me. I remonstrated once with the player and the referee.

“’I’m not going to get involved in a public debate with the Hibs manager’. Do you know why he doesn’t want to get into a public debate? Because he is wrong and he is trying to make light of a very serious incident.

“What was he doing then? Because after Oyenuga halves my player and feigns a headbutt, by the time I’ve looked up he’s in my face – not protecting his players. Coming for me!

“All I’m getting in the statement is Jim trying to defend himself and say I didn’t offer him a square go.

He went on: “I was stood on the touchline and I told the player he was a disgrace and then [gestured] to the referee to get him off. That does not warrant a manager running at me wanting a fight, or his assistant or his kitman or his first-team coach.

“Jim has made a joke of it: ‘Maybe I should ask Lenny what it is like to go to the SFA’. Very funny! I don’t find it funny.”