SHOCKING footage has captured the moment a driver headed the wrong way over a roundabout – in order to overtake a lorry.

In the video, captured in Hatfield, Hertfordshire last month, the driver goes right of a keep left sign and risks a head-on collision to pass the HGV.

At the start of the clip, recorded on the dashcam of another lorry driver, what appears to be a black Alfa Romeo Giulietta can be seen closely following a large goods vehicle on a road just off the A1.

The car appears impatient and is following close behind when the pair approach a roundabout. 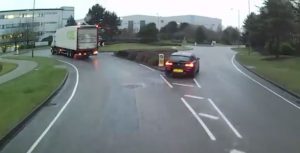 The lorry indicates right, the same direction as the car.

Clearly unwilling to wait, the car driver turns right of a keep left sign, and speeds up to beat the truck to the exit, whilst going counter clockwise round the roundabout.

Jaroslaw Iwaszkiewicz, who recorded the clip, uploaded it to Youtube last week, where it has had hundreds of views.

He said he would have identified the driver’s number plate but could not make it out due to the weather conditions.

Matthew Etheridge said: “I have seen someone do that on a mini roundabout but never a full size one like that, especially as there’s no way he could have been able to see.”

Steve Charlton wrote: “Wow, I’ve never seen anyone do that.”