LEONARDO Di Caprio has reminded his 15 million followers of the importance of Scottish wind farms – in an Instagram post.

Earlier today, The Oscar winner posted an image of a Scottish wind turbine which was liked 44,000 times in just ten minutes. 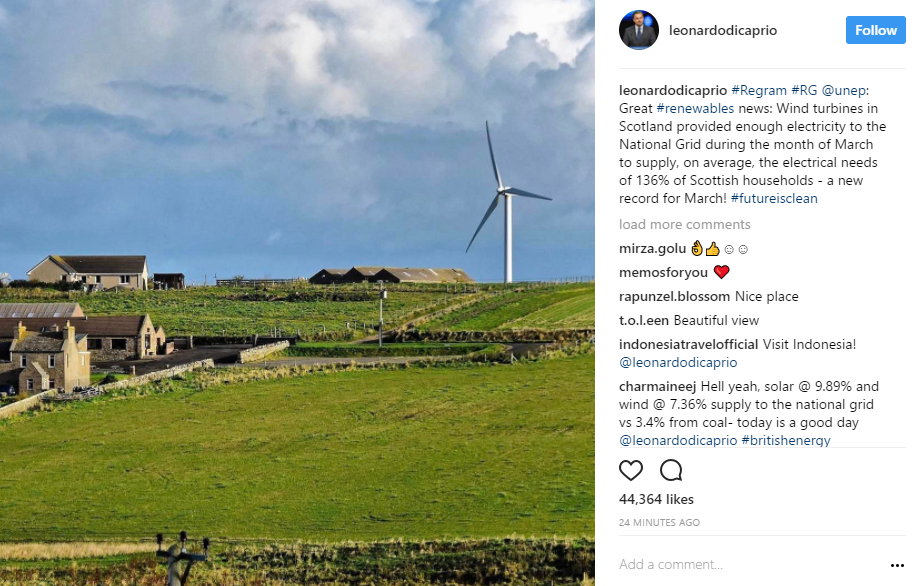 Di Caprio sent the image with the caption: “Wind turbines in Scotland provided enough electricity to the National Grid during the month of March to supply, on average, the electrical needs of 136% of Scottish households – a new record for March!”

Earlier this month, analysis by WWF Scotland of wind power data from March found that turbines in Scotland provided 1,240,095 MWh of electricity to the National Grid – enough to supply, on average, the electrical needs of 136 per cent of Scottish households.

This represented an increase of 81 per cent compared to that of March 2016, when wind energy provided 684,632 MWh.

Di Caprio’s fans were quick to thank him for publicising the statistics.

A user known as Nineflutterbyes said: “Awesome! Keep pushing for us!”

One user, A_DiCaprio02 wrote: “You are the best actor and environmentalist in the world.”

A user known as Rich Mc quipped: “That’s because it’s windy as f**k here in Scotland.”

Whilst there DiCaprio visited Home, a restaurant which gives its profits to the homeless.

Hundreds of fans queued in the pouring rain to get autographs from the star, who won his first Oscar for Best Actor in 2016.