POLICE scored a road safety own goal after a tweet from traffic officers showed a patrol car parked dangerously.

Police Scotland warned drivers that patrols were “out and about” but the tweet showed an empty marked car parked at a junction.

The highway code states that drivers should not park “within ten metres (32 feet) of a junction”.

To make matters worse, the tweet was “liked” by top brass. It has since been deleted but not before it was spotted by easgle-eyed road safety campaigners.

The AA accused the force of scoring an own goal and reminded them that traffic laws apply to everyone.

The blunder happened when South West Fife Police used the hashtag “road safety Fife” to alert their followers to the fact that their officers were patrolling the local area.

The South West Fife police account sent the tweet yesterday morning (SUN) with the caption: “Rosyth Community Officers out and about #roadsafetyfife.”

The picture showed an unoccupied police car parked at the edge of the junction, obstructing other road users from having a clear view of the busy road ahead. 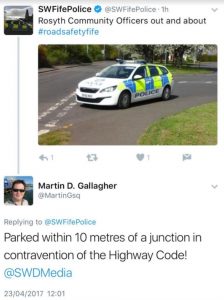 Despite the glaring error, the tweet was liked by Deputy Chief Constable Rose Fitzpatrick, the DCC of local policing for Police Scotland.

A spokesman for The AA said: “While commending the Police for tweeting their presence and, after all, there certainly needs to be greater police visibility on our streets, sharing an image of their vehicle illegally parked (ie within 10m of a junction) and clearly not attending an emergency is a bit of an own-goal.

“Police and other emergency vehicles are subject to the same traffic laws and Highway Code rules as the rest of us.

“The message here is think before you commit an image or comment to social media as the consequences can – as in this case – be far reaching.”

A spokesman for Scotland’s Worst Drivers, who spotted the blunder, said: “”The officer that parked this vehicle in order to take the photo has caught themselves bang to rights!

“Surely in order to enforce the Highway Code officers need to comply themselves otherwise how can they penalise others? Do as I say, not as I do attitude.

“It’s very concerning that Deputy Chief Constable Rose Fitzpatrick chose to show her approval by liking the tweet, but yet chose not to highlight the fact by retweeting.”

It’s not the first time the force has been mocked for its use of social media.

In April 2016, Police Scotland were the butt of the joke following a tweet about internet safety.

They asked users to think it what they were saying was “true, hurtful, illegal, necessary or kind” before they typed.

However, the tweet was met with a series of mocking replies and memes, with people suggesting that the force would have to arrest someone because they hurt their feelings.

And earlier this year, they were ridiculed for sharing a list of secret codes that teenagers had supposedly been using to communicate.

Users were quick to point out that they hadn’t heard of the majority of them, with one claiming it was the “biggest load of garbage” they’d seen.

A Police Scotland spokesman said: “During the short time this vehicle was stopped, an officer was present to monitor traffic and ensure there were no issues that arose.”

But Scotland’s Worst Drivers hit back: “Police Scotland’s comment is flawed due to the fact there appears to be no officer in the car or near it.

“There is still no avoiding the 10 metre rule. No one is allowed to park that close to a junction as it blocks access for other road users and pedestians.

“Police Scotland obviously agree or they wouldn’t have deleted their tweet.”