SCOTS comedian Limmy has shared a photo of the scars from his attempted suicide as a teenager.
Brian Limond shared a picture on Twitter showing thin white scars on his wrist.
The image was one of two pictures he posted with the caption: “Slashed my wrist when I was 15 and lay in this shed to get some attention. GET IN, LAD.”
The other snapshot shows a red shed with a black roof, looking out across Newtown bay, which the comedian claims he lay in after slashing his wrists.
The incident happened in the seaside town of Millport on the island of Great Cumbrae. 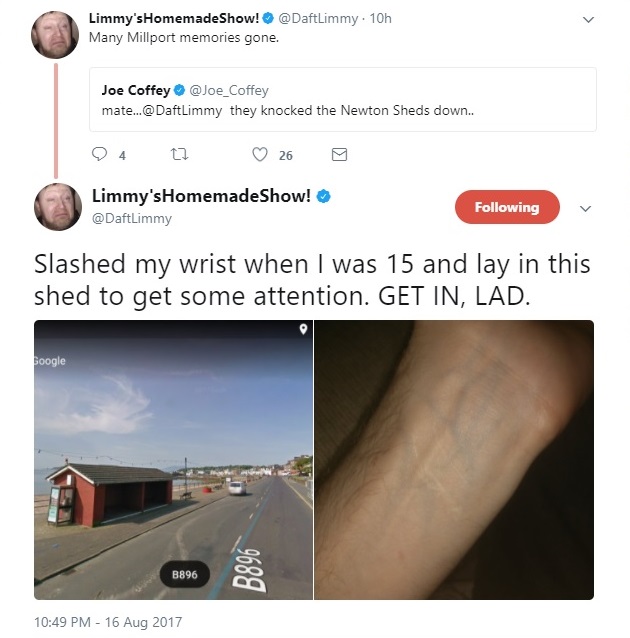 Limmy, 42, was responding to a tweet from Scottish wrestler Joe Coffey, who told the comedian the shed in the picture had been knocked down.
Fans were quick to comment on the post, showing support and concern for the comedian.
Robert Litten wrote: “Sorry to hear that, mate.”
Dreamofzeal added: “Jesus christ!”
Others reacted with black humour worthy of the comedian himself.
Ian Corbett wrote: “Did you get any or just a cool scar?”
Keir Hamilton commented: “Started from the bottom now we’re here.”
Narrowboat Captain added: “You have never changed.”
Stephen joked: “Oh I do like to bleed beside the seaside.”
While I_am_peevee added: “Oh you!”
Limmy said in an interview in 2015 that he had been on holiday in Millport as a teenager when a girl he had been dating for a few days refused to say she loved him, prompting him to take drastic action.