The panicked Scottish comdian took to Twitter this morning to reveal the approaching storm has cancelled dance partner Kevin Clifton’s flight from London to Glasgow this afternoon.

In a desperate bid for help from her followers, Calman even tweeted travel magnate Richard Branson if she could “borrow a plane or a helicopter”.

The travel disruption could mean the pair only have three days to rehearse before the live show on Saturday night.

Pro dancer Clifton was due to arrive in Glasgow later today after rehearsals in Lodon but high winds from Storm Ophelia have resulted in the cancellation of many flights.

Gusts of up to 80mph are set to batter the country and possibly Calman’s performance.

In a series of funny posts, the comedian wrote: “Really hoping @keviclifton makes it up to Glasgow later. I’m not a natural at the cha cha cha and need all the rehearsal time I can get!” 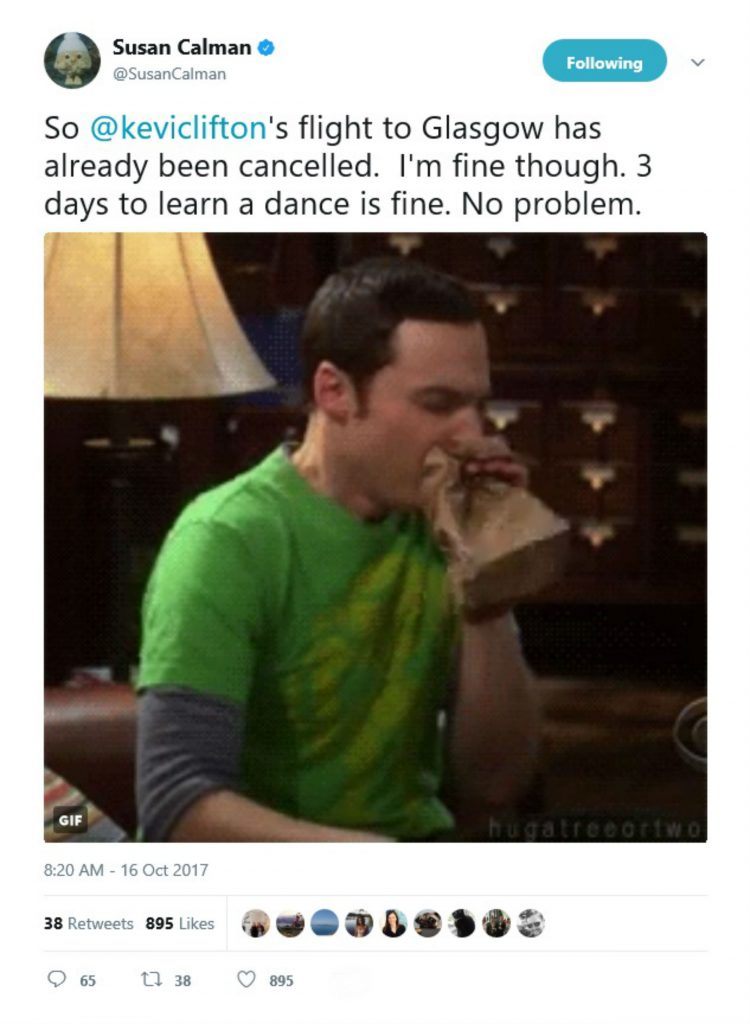 Before tweeting with a funny GIF: “So @keviclifton‘s flight to Glasgow has already been cancelled. I’m fine though. 3 days to learn a dance is fine. No problem.”

Calman then tried to get in touch multi-millionaire businessman Richard Branson, saying: “Hi @richardbranson. We met on the One Show last week. Can I borrow a plane or a helicopter or a train? Just for a day. Thanks.”

She then sarcastically tweeted: “Thank goodness I’m such a natural at the Latin dances. We will have two and half days to learn the number.”

Hundreds of fans and followers have replied to the panicked star, offering to help Clifton venture north through the storm.

Author and broadcaster Muriel Gray said: “I’ll give him a piggy back all the way. You carry on stretching.”

@BumbershootKate said: “If he takes a taxi, I’ll chip in a tenner for the fare. Send me PayPal details or start a GoFundKevin.”

@scifisunsets replied: “We’re driving from Penrith to Glasgow at lunchtime ish, so if he needs a lift from there just shout!”

Yellow weather warnings are in place for many parts of the UK, particularly along coastal areas and in the north west as the Met Office warn the gales could cause injuries and “danger to life”.