A STUDENT was tricked by friends into making a grovelling apology to his lecturer for missing classes.

Dan Barron got a call telling him he was being thrown off his course for poor attendance.

In a blind panic, the 20-year-old dashed off an email to his lecturer in which he owned up, apologised repeatedly and vowed to turn up to lectures in future.

But to Dan’s shame – and to his lecturer’s delight – it turned out the call had been made by friends at Nottingham Trent University (NTU), Jemima Kelly and Emma Gold.

Once the accountancy and finance student from Birmingham had got over his mortification he posted screenshots of the prank online. 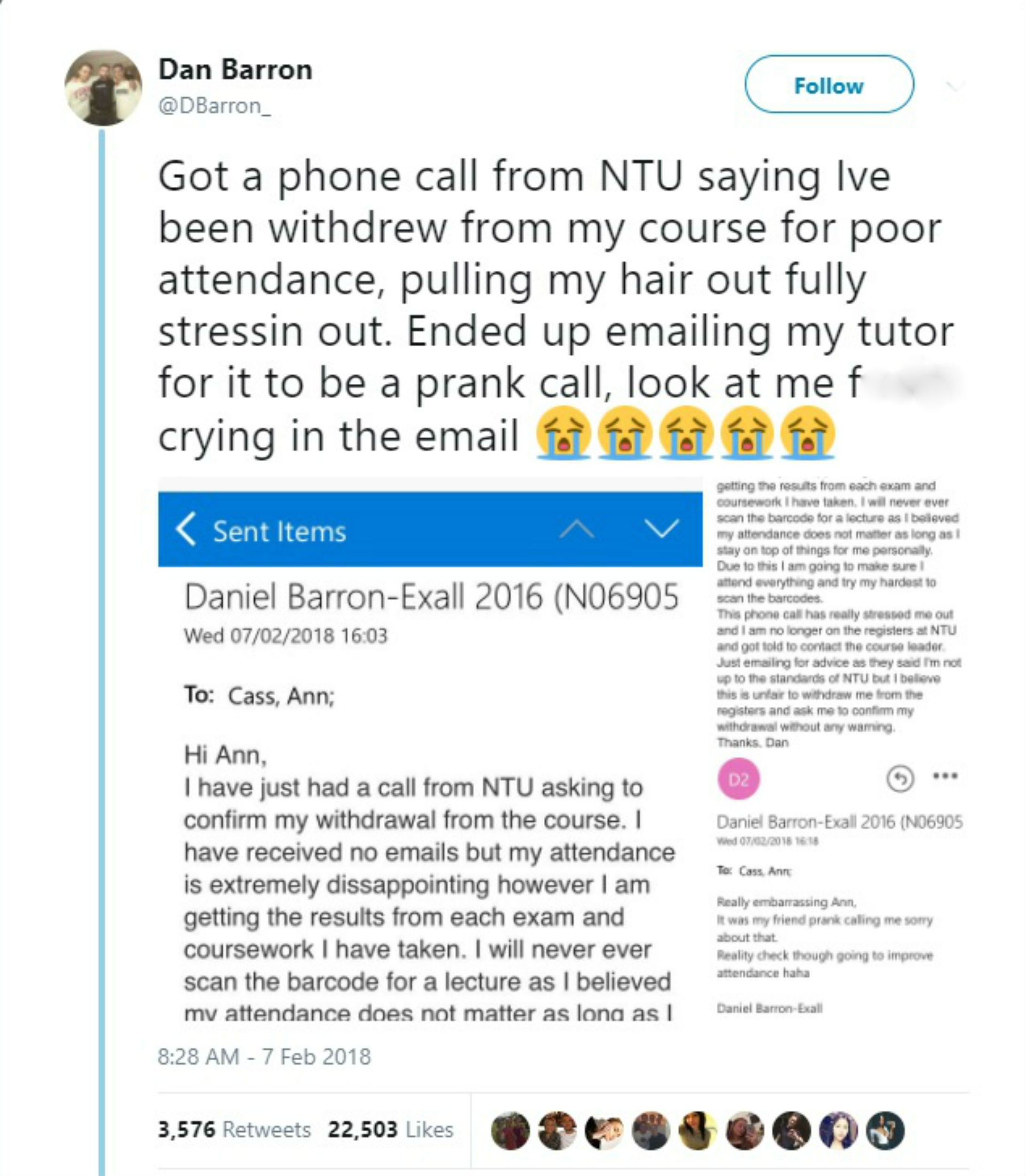 Perhaps inevitably, Dan has admitted that he woke up the day after promising to mend his ways – and realised he had missed two lectures.

He shared on Twitter: “Got a phone call from NTU saying I’ve been withdrew from my course for poor attendance, pulling my hair out fully stressing out.

The email to his tutor begins: “Hi Ann, I’ve just had a phone call from NTU asking to confirm my withdrawal from the course.

“My attendance is extremely disappointing however I am getting the results from each exam and coursework I have taken.”

Referring to the electronic system used to monitor attendance at lectures, he added: “I never ever scan the barcode for a lecture as I believed my attendance does not matter as long as I stay on top of things for me personally.

“Due to this I am going to make sure I attend everything and try my hardest to scan the barcodes.”

He told Ann: “This phone call has really stressed me out and I am no longer on the registers at NTU and got told to contact the course leader.

“Just emailing for advice as they said I’m not up to the standards of NTU but I believe this is unfair to withdraw me from the registers and ask me to confirm my withdrawal without any warning.”

Jemima, who made the prank call, then decided it was time to put Dan out of his misery and told him by Snapchat he’d been pranked. 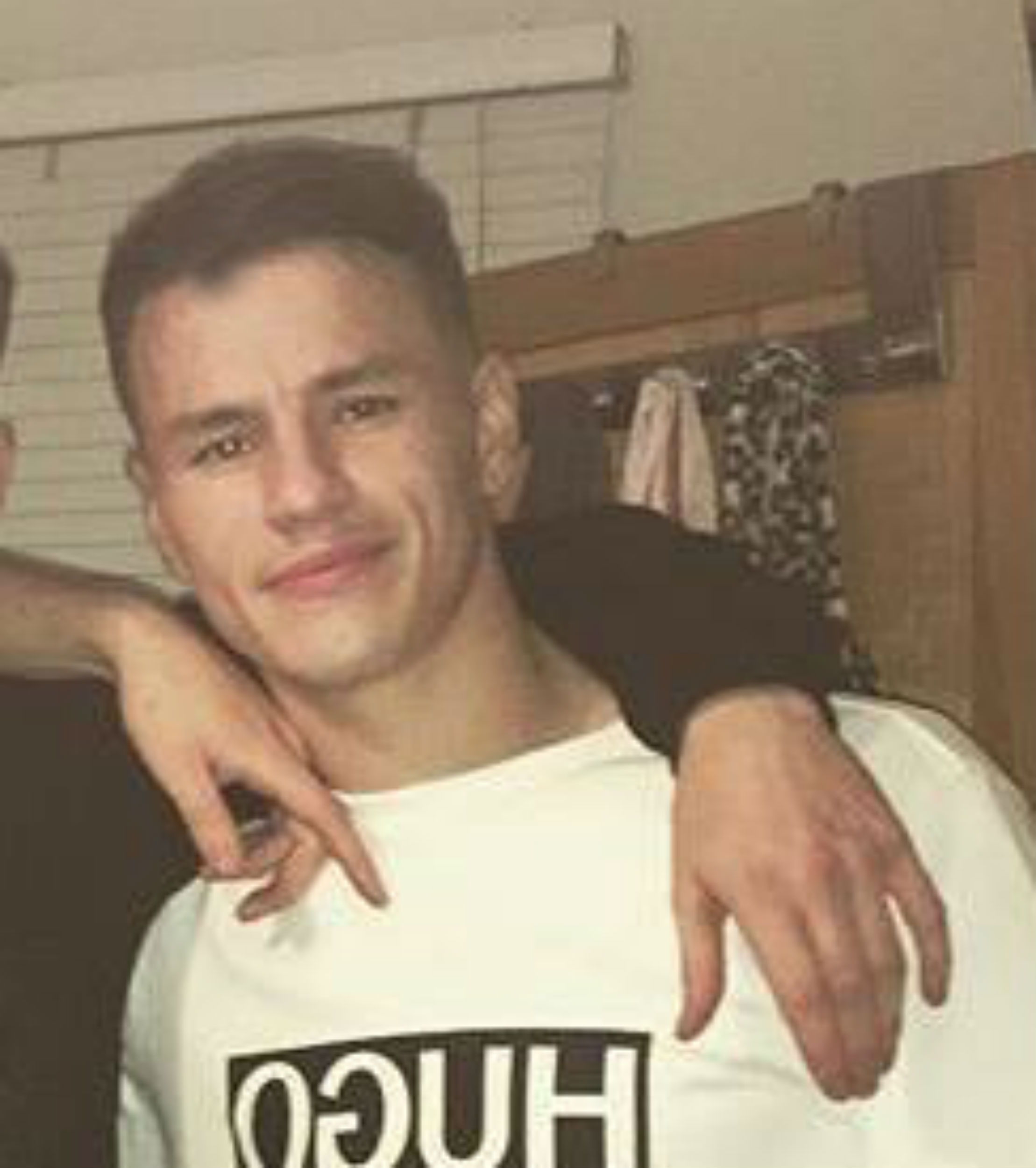 Dan then emailed his tutor: “Really embarrassing Ann. It was my friend prank calling me sorry about that. Reality check though going to improve attendance.”

Dan said today: “The lecturer is a lovely woman and was a great sport. She explained how it made her laugh a lot and she hopes I get revenge. Also that she hopes I stick to my word in what I said in the email.”

Asked if that would be the case, he admitted: “I woke up the next morning and realised I missed two lectures.”

Jemima, 19, said: “I called him up, and just put my ‘adult phone voice’ on, said my name was Angela from NTU administrations, and told him I was just calling to confirm his formal withdrawal from the course.

“I tried to tell him straight away it was me on the phone but by the time he looked at his messages he’d already emailed his teacher”, she said.

The Tweet has gone viral, attracting almost 4,000 retweets and being liked by over 24,000 social media users.

Hundreds of comments were also left, with users finding the prank hilarious.

One said: “Why has someone beat me to this prank?”