A STUDENT has shared the the very laid-back response she received from her mother after interrupting her holiday with the news she had crashed the car.

Cathy Hirst, 48, hilariously messaged her daughter back that she was “too p*****” to deal with the crisis.

Olivia, 19, had driven her Toyota into the back of another car on her way home to Leeds from work in York.

Cathy, who was on the first day of her holiday to Tenerife, pays the insurance on her daughter’s vehicle.

Olivia’s message, sent on Sunday, read: “I hope you can understand because you’ve hit cars before and it happens so quickly and I have to tell you because if they do claim you’ll get a phone call because it’s your insurance.

“I’m really sorry and I don’t want to ruin your holiday.

“If he does claim he’s pathetic because he had a tiny black mark on the back of his car, no dent or anything. I’m really sorry for messing up all the time but I’ve been worried all the time since yesterday. I’m sorry, I love you.”

A couple of hours then passed until she got back again to tell her daughter to stop worrying.

Olivia took a screenshot of the hilarious response and posted it to Twitter with the caption: “My mum’s reaction to my car crash.”

The post has gone viral and attracted over 2,000 retweets and 30,000 likes from social media users. 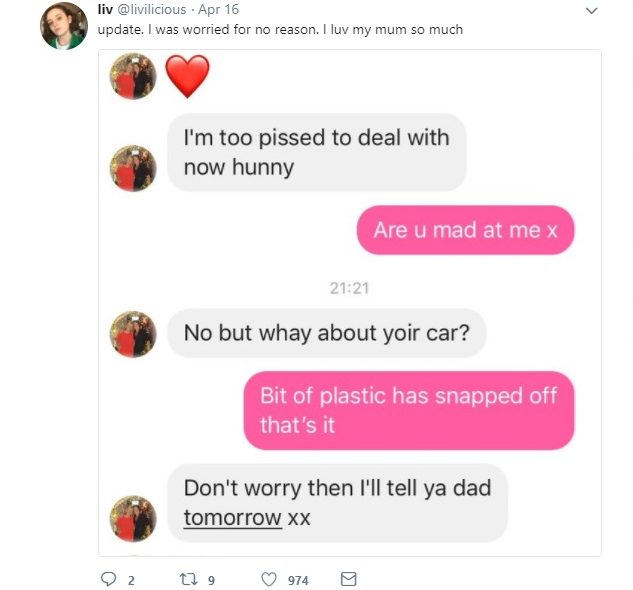 In a further tweet, Olivia revealed the rest of the conversation, adding: “Update. I was worried for no reason. I love my mum so much.”

A second screengrab showed that she had replied asking her mum “Are you mad at me?” and two hours later Cathy said: “No but what about your car?”

The teen assured her that the damage was minimal, prompting the response: “Dont worry then I’ll tell your dad tomorrow” before adding: “Hope you’re ok silly” and another heart.

One said: “This is so cute, I can feel the anxiety coming from that paragraph though for real.”

Jamie Daly said: “Bless, that’s the best reaction. Try not to worry too much, this stuff happens and it’s not the end of the world.”

While another added: “I love your mum.”

Speaking today (WED), Olivia said: “The crash wasn’t bad and I’m fine which was her main concern when she’d sobered up. I went into the back of a car because I wasn’t concentrating.

“I was so glad she was fine with it. She pays for my insurance and it’s my first year of driving so I was so scared that if the other driver made a claim my insurance would be really expensive in my second year.

“I didn’t want to ruin her holiday either because my car had broken down a couple of weeks ago and they’d spent a lot of money fixing it so it would be more stress for them.” 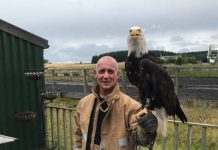 Scottish firefighters called out to over 2,000 animal rescues in the past five years