SHOCKING video shows two cars come within feet of a head-on smash after one of the drivers overtakes on diagonal stripes at a junction.

The reckless motorist comes close to smashing into an unsuspecting driver who turns left at the junction, not realising the fast-approaching danger.

Apparently unabashed, the driver continues to overtake a line of vehicles despite the terrifying near miss on the A631 near Bishopbridge, Lincolnshire.

The dashcam video shows the overtaking car clearly cross diagonal white stripes with a broken white line which should only be crossed if necessary. 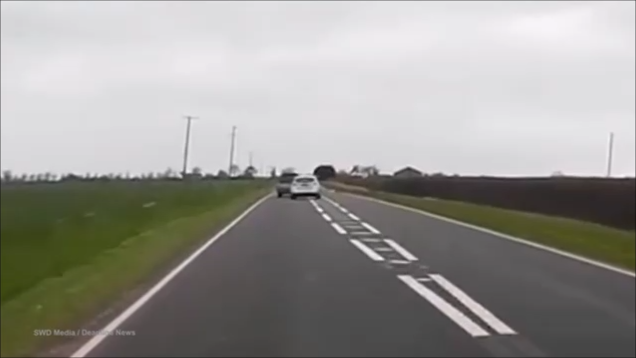 The driver fails to notice the car approaching the junction and is forced to swerve at the last moment, almost crashing into the pickup they are overtaking.

The pickup can be seen putting on the brakes to avoid a crash and swerves towards the side of the road. 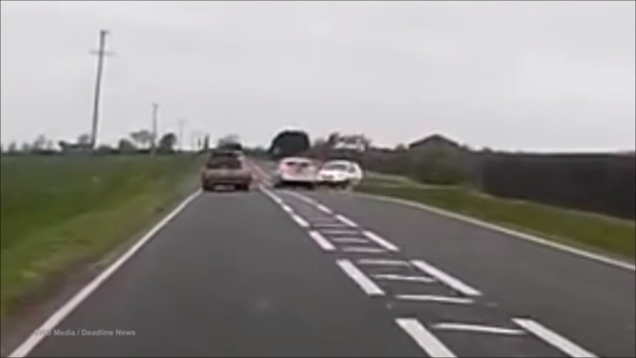 According to rule 130 of the Highway Code the white diagonal stripes or chevrons are designed to separate traffic lanes and protect cars turning right, if the area is bordered by a broken white line the area should not be entered unless necessary.

RAC spokesman Simon Williams said: “This is a dangerous manoeuvre which could so easily have ended in a very serious head-on crash.

“While the Highway Code is clear that areas of white diagonal stripes with broken white lines should not be entered unless necessary.

“There must surely be an argument for this to be made into a solid white line area to protect road users pulling out of the junction.

“As it is, the broken white line, which is intended to separate traffic travelling in opposite directions, is unintentionally courting a overtaking disaster.”

A spokesman for SWD Media, who obtained the footage, said: “It’s extremely lucky that this incident never ended in a collision, however it looks like the driver of the Focus was not phased one bit as he continued on the wrong side of the road in his attempt to save time. 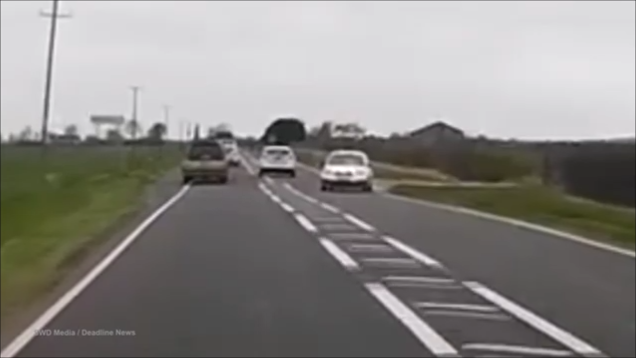 “He failed to notice or ignored the keep left arrows, chevrons and the warning sign of the junction to the right ahead, then to continue to overtake is utterly reckless.

“Perhaps the driver needs to familiarise himself with rule 130 in the Highway Code as this manoeuvre was neither necessary or safe to do.”

He added: “I also find it concerning that the Fiesta driver didn’t seem to slow down much for the junction, or look both ways before joining the carriageway – always be prepared for the unexpected.”

A spokeswoman for Lincolnshire Police said it appeared the incident had not been reported to them but further checks would be needed to be certain.

Three-bed house with large garden on market for £10,000 – but buyers will have a huge restoration project