SHOCKING dashcam footage captured the moment a 90-year-old driver abruptly pulled out in front of a taxi driver before saying “my eyes aren’t what they used to be”.

Stef Allen slammed on the brakes and swerved around the OAP’s black Peugeot after it pulled out from a junction onto busy road in Essex.

The 49-year-old from Maldon, Essex had a family of four in his taxi when the near-miss happened yesterday.

After pulling over to confront the culprit, Stef claims the elderly man apologised before blaming the incident on his bad eyesight.

And added that as he was telling the pensioner he was reporting him to the police, the furious OAP then began running after Stef’s taxi – leaving his car stranded in the middle of the road.

The shocking incident comes the same week police across the UK announced that drivers who failed roadside eye-tests would have their licences immediately revoked.

In the short clip, Stef can be heard shouting “you stupid b*****d” before honking his horn while he maneuvered his car out of its path.

Two oncoming vehicles can be seen coming towards the incident – just metres away from the near-miss.

Speaking today, Stef said: “It shook us all up really. The passengers more so. I’d say he was about 90.

“I am a taxi driver so used to idiots. The passengers were terrified. It was two adults and two young children.

“I spoke to the driver and he said ‘sorry its my eyes, they weren’t what they used to be.’

“I said to him ‘I am reporting you to the police’ and he chased me up the B1008 on foot. He left his car in the middle of the bloody road.

“I also told him he is a danger to other road users and should not have a license.”

Stef uploaded the video onto Facebook yesterday captioned: “Old biddy in his 90’s said ‘sorry mate, my eyesight is playing up’.

The clip has since attracted dozens of comments from social media users calling for older drivers to have to resit their driving tests. 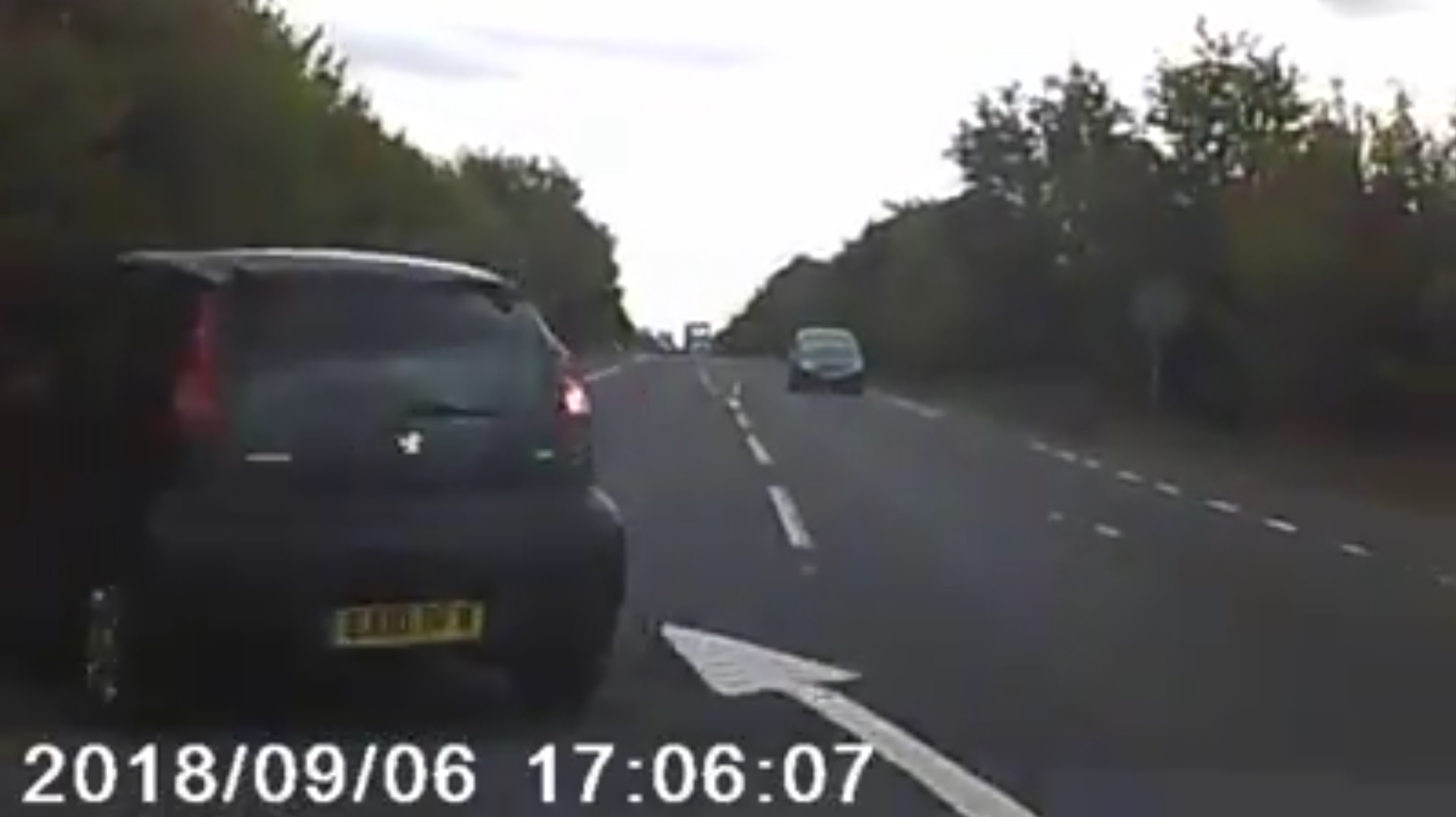 One user said: “A few seconds later with that truck coming it could have been a totally different story.

“Great reactions. I’m guessing new trousers were needed after this?”

Another wrote: “Not only good reactions, but good composure to not overcompensate.

“Old, blind drivers should be shot at birth.”

Another viewer wrote: “I bet your tyres look partly like F1 tyres after that.

“Well done for avoiding him. I think this is why retaking tests should be mandatory at a certain age.”

Road safety campaigners today  said the OAP driver “should have known better” and should get his eyes tested.

Neil Greig, Policy and Research Director at IAMRoadsmart, said: “Eyesight may have played a part in this incident but the manoeuvre itself was very stupid no matter who had tried it as oncoming traffic is masking the approaching taxi.

“At the very least this driver could benefit from being sent on a careless driving awareness course as well as having their eyes checked.

“The fact that an element of road rage was involved after the event suggest this driver has a bad attitude problem and at 90 should know much better.

“Police forces are now much more aware of eyesight as an issue and several are piloting a new scheme to test eyesight at the roadside alongside the standard things such as insurance, licence, MOT and alcohol/drugs.

“IAM RoadSmart supports such a move as any driver who risks driving with poor vision should be aware they may be caught anytime, anywhere.”

Ian Crowder, Head of Policy at the AA, said: “The AA support an eye sight test for people over the age of 70 every three years.

“This will mean they will have to provide evidence that their eyesight is good. However, this has to be carried out sensitively as one rule can’t apply to all.

“The majority of older drivers recognise their own shortcomings in terms of health and eyesight is the main reason why so many of them hang up their car keys.