THREE mothers have claimed their babies were left with blistering skin and “burns” after Aldi changed the make-up of their wet wipes.

Abbey Blackburn from Moreton, Chloe Baker from Prenton, and Jessica Mclear from Wallasey, all The Wirral have blamed a change to the 49p Mamia Sensitive baby wipes for their children’s painful rashes.

While Chloe, 21, said her daughter Cleo, became “hysterical” after sores on her bottom began to bleed.

Jessica, 24, also says her one-year-old Phoebe has been left with scarring after developing a similar rash.

Abbey and Chloe say they had been using the Aldi wipes without any issues until the retailer altered the wipes.

The “burns” were so severe, that both women took their daughters to the doctors, with Georgie being prescribed steroid cream.

A concerned Abbey took to social media to warn other parents.

She posted photo’s of Georgie’s skin with the caption: “Just had a phone call from Aldi who confirmed they have changed their wipes.

“If they get a certain number of complaints they will review them, so please share and if your baby has a rash it’s probably the wipes!

“I’ve been using Aldi baby wipes on my little girl since she was born (a year and a half ago) and the past few weeks shes come out in the most awful rash ever! (Burns).

“I was thinking it was nappies as I tried another brand! I also noticed when I got the wipes out about ten came out at the same time, when they never used to, so I know they’ve changed their wipes.

“Also the packet says less ingredients so I’m guessing they have changed them, I’ve changed my wipes and its starting to clear up the burns!

“Please watch your little ones with these wipes! And please share.”

Shannon Neilson wrote: “Believe it or not Katelyn’s been like this the last few days. Exactly like the pictures and I’ve been using Aldi wipes, but never again.

Sarah Dodd added: “We have had this too with our little girl. Even went the doctor’s and got some cream. Definitely changing these tomorrow.”

And Jane Sullivan said: “Our baby’s bum was terrible. Gonna take them back, gone better a bit since we haven’t used them.”

Speaking today, Abbey said: “I’ve used Aldi wipes from the day she was born. I was using at least three or four packs a week so I never even thought it was the wipes until I noticed that five to six wipes wipes started pulling out at the same time when they never used to.

“I read the packet that says less ingredients ingredients, so I knew they had changed them.

“I stopped using the wipes and got in touch with Aldi, who said on the phone they still go through the same testing.

“Since I’ve stopped using them it’s gone a lot better, not a hundred percent, still slightly scarred like marked blight, but I’m hoping they go soon.

“I’m not trying to cause trouble, I just want the awareness that the wipes have changed.”

“I often use the wipes to wipe around her mouth after she’s eaten and she had a bad rash there too, I put it down to the weather and maybe an eczema flare up, but it just kept getting worse. 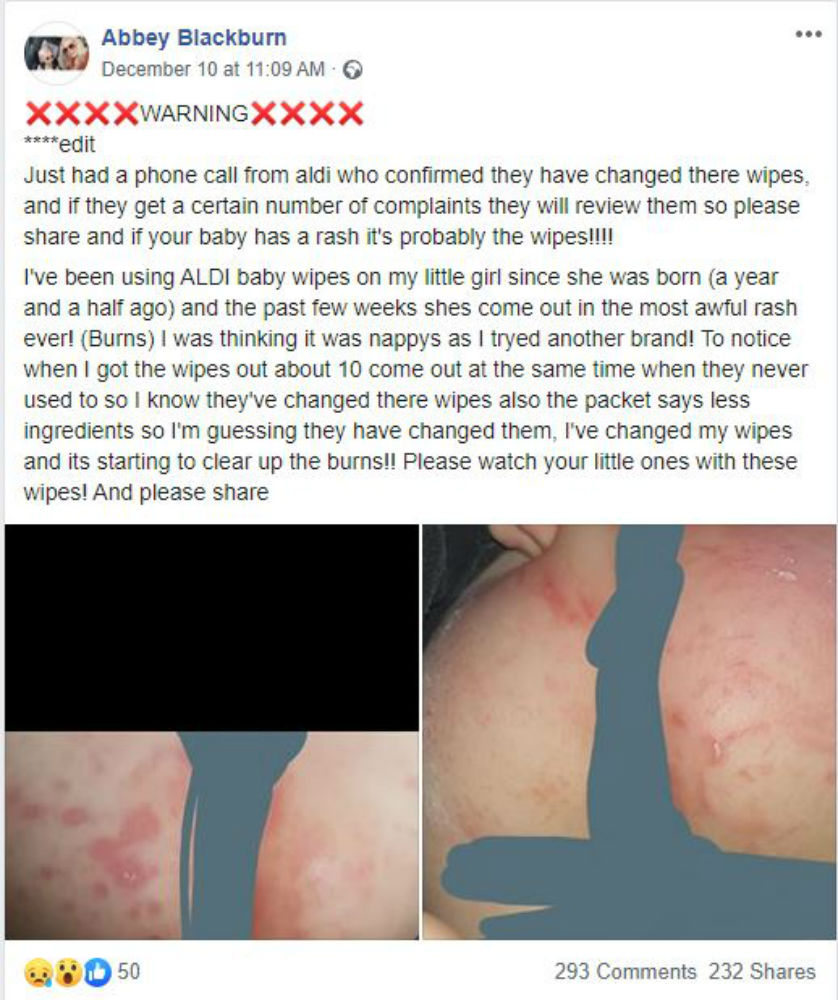 “It wasn’t until I realised the difference in the wipes seeming more wet than usual and all coming out stuck together.

“I mentioned to my sister about thinking they’d changed something in it as the rash on her bum looked more like a chemical burn.

“She was hysterical when changing her nappy, as some of the sores began to bleed.

“Thanks to using Bepanthen she is now all healed, but I’m not sure if I’ll be sticking to Aldi if the wipes stay the same.”

Jessica said: “The rash started about four or five weeks ago. It’s was more like burns, there were red blisters all over her bum.

“We ran out of wipes one night and had to get a pack of pamper wipes from our local shop. My partner had mentioned the constancy of the mania wipes being very wet in comparison to the pampers and we wondered if that was the reason for the rash, just the bum being wetter than usual.

“So we continued to use the pampers until we got to Aldi to get more of the Mamia sensitive wipes. When we got more the rash came back and we couldn’t understand it.

“The rash has basically gone now except the scars that have been left behind on one of her bum cheeks.”

Aldi said they would discuss the complaint with their supplier.

An Aldi spokeswoman said: “All of our wipes are dermatologically tested and accredited by the Skin Health Alliance.

“However, as with all cosmetic products, there is always the possibility of an individual intolerance to a particular ingredient.

“We were sorry to hear about Ms Blackburn’s experience and have raised this with our supplier.”