HILARIOUS video shows a cruel prankster trick his victim into having eggs cracked on his skull – while dodging paying the £30 he promised for the stunt.

Robbie Weir was promised the cash if he agreed to go on camera and have six eggs cracked over his head.

But wily Andrew Grimshaw breaks the last of the eggs of the ground, leaving a shocked Robbie covered in goo and out of pocket.

Andrew, 23, set up the sting in Denny, Falkirk, while his girlfriend, Amy Weir, also 23, filmed.

Amy can be heard laughing at her little brother as the eggs are smashed down on his head.

After the fifth egg is broken on his head, a chuckling Andrew can be heard saying “six eggs for £30 over your head”.

He then smashes the last egg on the ground.

A bemused Robbie then looks up and asks: “What did you do that for?”

Andrew repeats “I said six, not five” and bursts out laughing.

After initially looking fuming when he realises he’s been tricked Robbie later starts smiling and repeatedly says “no, no, no, no way. That’s s***e.”

He then walks off, covered in egg, while his family can be heard laughing in the background.

Andrew posted the clip onto Twitter on Saturday captioned “Screamer” and later revealed the prank was in revenge after Robbie called him “fat”. 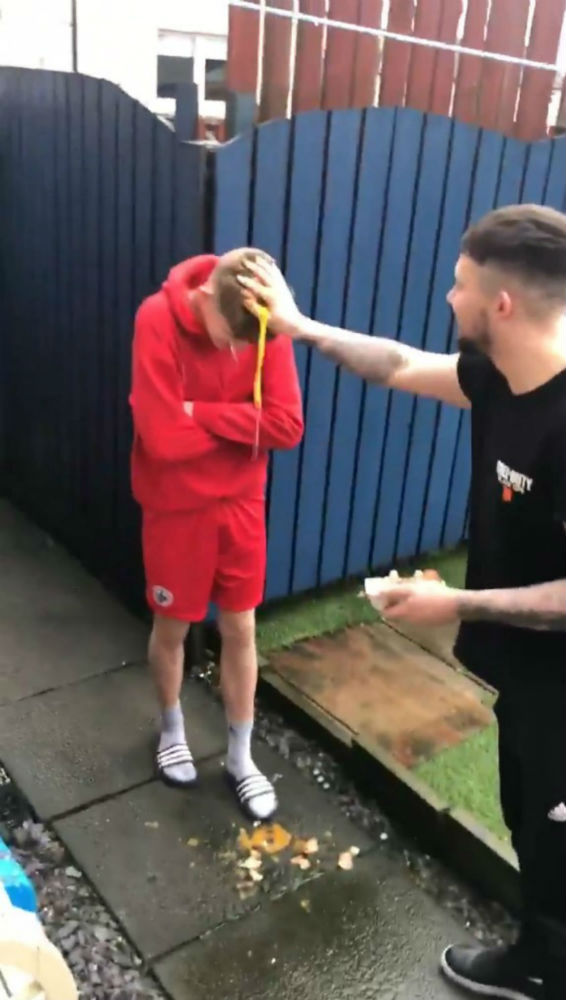 Since then it’s attracted more than 446,000 views and hundreds of comments online.

Wayne Stewart said: “Deserves it just for the socks with the flip flops.”

Andrew replied to comments saying the youngster had kept calling him “fat” but revealed he did end up giving the teen £20 for his efforts.

Speaking today (tue) , Andrew said: “So my girlfriend’s little brother had been winding me up for some time calling me fat and other things so me and my girlfriend decided to play this old joke on him.

“I offered him £30 if a could smash six eggs over his head and he agreed straight away. The easiest £30 he’d ever make.

“So we got his mum to buy the eggs and we went out in his garden. My girlfriend filmed it out in the garden whilst I done the smashing of the eggs.

“Her dad, Garry Weir, is the one you can hear laughing in the background.

“We let him sit for half an hour thinking he had got nothing but we decided to give him £20 as he was devastated.”