OWAIN FON Williams reckons being able to brush up on his hobby as an artist means he is better placed than his fellow players in surviving the bleak football landscape.

The Hamilton Accies keeper spends much of his spare time painting and has had his works, which sell for upwards of £500, displayed in galleries back home in Wales and in Scotland.

Currently on loan at Dunfermline, the 33-year-old has produced a special portrayal of East End Park in the 1960s to help raise money for the ‘Support the Pars’ fundraising appeal. 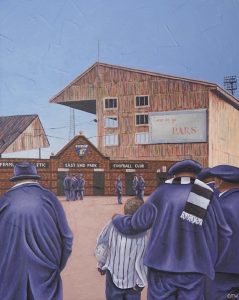 The former Inverness Caley Thistle and Tranmere Rovers number one is hopeful his composition, which is to be auctioned off on Saturday, will generate some much-needed funds for the Fifers as they battle against the financial fallout of the coronavirus pandemic.

But the Wales internationalist believes drawing on his beloved pastime means he is better placed than many of his team-mates and rivals when it comes to coping with the SPFL shutdown.

He said: “A lot of footballers like golf and obviously you can’t play golf at the moment. So, what do you do?

“If you’ve got a big enough house you could buy a screen and practice a little bit; I’ve seen a few players doing it that way, but you need space and it costs money.

“The rest of them play on the PlayStation or something like that, but there’s only so much time you can spend in front of a telly.

“And, then, what else do they do with their time?

“So, I’m really lucky in a way that I enjoy art. It can occupy me for a long time, just painting away. For now, I’m not too bored, I’m okay.

“We’ve never been in this situation before, having to stop playing football for a long period of time when it’s not because of an injury.

“It’s a funny period for everybody involved in football at the moment but I’m lucky I’ve got an interest in art and I always have.

“That’s what I tend to do after training. I come home and if I’ve got time I get my oils and canvas out and I paint.”

Williams was surprisingly allowed to join Dunfermline in January after making 21 appearances for Accies in the first half of the season.

But, as he awaits a decision on what will happen with the remainder of the campaign, he is glad he anticipated the current hiatus.

He added: “All of us are following programmes to keep fit. My day hasn’t changed that much, I’m training and I’m going out for a run when I’m allowed to.

“I bought a gym a couple of days before lockdown because I thought this might happen.

“So, I’ve got everything to keep fit and, until they decide whether they’re going to try to finish the season or end it, you’ve got to keep ticking over and try to be as fit as possible.”

Bids for Williams’ painting should be made to Kenny McLachlan by email at [email protected], with the silent auction finishing at 9 pm on Saturday.