SNP’s Equalities Convener has claimed she was reported to police after stating children as young as eleven should to be taught about “enthusiastic consent” to tackle rape and abuse.

Fiona Robertson was branded “sick” for promoting the framework with some rape victims saying “these people [rapists] don’t care about consent”.

However, other users defended Fiona, arguing that children need to know how to deal with coercion from a young age.

In a series of Tweets on Monday Fiona wrote: “I’m currently being reported to the police for saying a standard rape and abuse prevention framework is good, so yeah. We are truly through the looking glass.

“The best stats we have show that, of women who have been raped in their lifetime, nearly a third had it happen between the ages of 11 and 17.

“Teaching children comprehensive consent education – how to say no, how to check for enthusiastic consent – is beyond necessary. The puritanical, anti-education aspect of this movement is unbelievably dangerous.

She adds: “For the referenced group who are happily twisting things: children cannot consent to sex. However, there are a lot of steps before sex which also require consent. Holding hands, kissing, being alone with someone.

“Also, since an awful lot of people seem unfamiliar with the phrase ‘enthusiastic consent’, which is a staple in rape prevention programmes.”

@Rosa__Borg wrote under the tweet: “Teaching them how to say no, I agree with. Teaching ‘enthusiastic consent’ to an 11-year-old would be teaching them to consent to abuse.

“This is sick and using statistics re. rape to try to back the argument is even sicker. 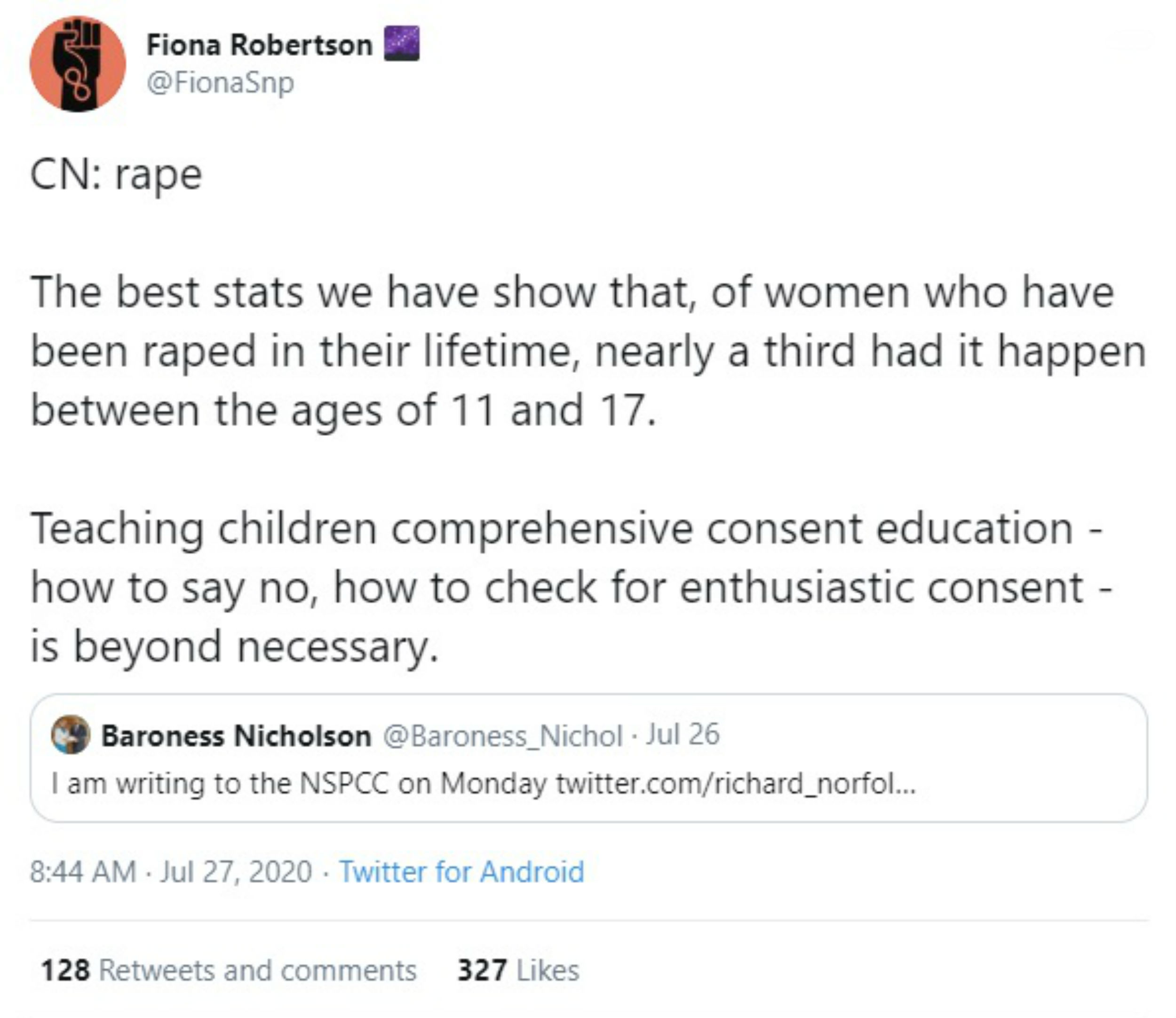 “Why are you conflating child rape with consent? They are two entirely separate conversations.

Another said: “WTAF! I was raped one week before my 17th birthday. I repeatedly said no.

“Is Fiona trying to say that if I knew about ‘enthusiastic consent’, that wouldn’t have happened to me?”

However, some have defended Fiona and agreeing with her tweet on educating children about stopping coercion.

@jennie_kermode said: “This kind of education is also really important for children who have been or are being abused.

“It gives them a chance to speak to someone about it (it’s not always possible to get help from family) and it helps them understand how they have been manipulated.”

@B***hImMelina wrote: “I knew quite a few girls at school who were date raped…and people acted it was just a thing that happened. I’m glad we’ve moved in from such thinking, but better education is still needed!”

@SiobhanFTB added: “Solidarity, Fiona. The rest of us recognise that the same pioneers who advanced the anti-gay sex panic in the 70s are the same reactionary filth have meltdowns over this.”