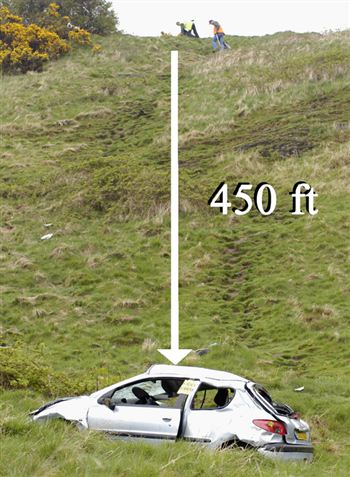 
FOUR friends have had a lucky escape after the car they were travelling in plunged 450 feet down a hillside.


The group were driving in the scenic Holyrood Park in Edinburgh when the teenage driver lost control of his car as he approached a bend in the road early yesterday (THURS) morning.


It skidded over the protective barriers and plummeted down the steep drop, before finally rolling to a stop half way down the rock face.


But miraculously, none of the friends, including the backseat passengers, were killed or suffered serious injuries in the horrifying smash.


And by the time police arrived at the scene – near the city’s Arthur’s Seat – three of the pals had managed to clamber free from the wreckage and were waiting to be rescued.


Emergency services had to climb down the steep slope to check the last passenger – a 22-year-old female – who was still lying on the hillside.


Firefighters lifted her using ropes and she was taken to Edinburgh Royal Infirmary to be treated for neck injuries.


An 18-year-old male, who was driving the vehicle, was also taken into hospital with minor injuries.


Two other male passengers – aged 19 and 22 – were uninjured and didn’t need treatment at all.


Now cops are saying the group were lucky to survive the wreckage – which saw the back end of the vehicle crushed and front windscreen smashed.


The silver Peugeot 206 left the road just yards from the car park near Dunsapie Loch.


The high section of Queen’s Drive was closed off in the early hours as emergency services attempted to remove the damaged vehicle from the slope.


A Lothian & Borders police spokeswoman said: “It appears that the car had skidded off the road as it approached the bend near the car park by the loch. It had rolled about 150 yards down the hill before coming to a halt.”


She continued: “It is very fortunate that all four people survived this crash which could have had much more serious consequences.


“We are still trying to piece together exactly what happened so we would appeal for anyone with any information to get in touch.”Fire appliances from Tollcross and Newcraighall were called to the scene to help the injured passenger.
Firefighters from the line rescue team had to use ropes to haul the woman back to safety.
A spokesman for Lothian & Borders Fire and Rescue said: “We arrived at the scene at around 1.20am this morning after the car had gone down the rock face.
“Line rescue personnel used ropes to help remove a female casualty from the slope before she was taken by ambulance to hospital.”