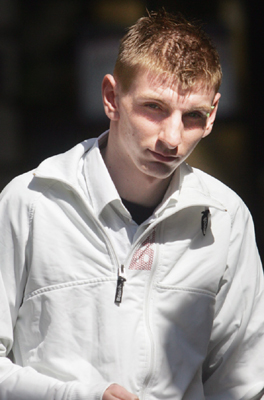 A MAN has been banned from keeping animals for five years after he starved three puppies to death.

Michael Nesbitt, 18, kept a litter of seven Border Collie Cross pups and their mother in a cage surrounded by their own faeces and urine.

And when he realised that three of the tiny dogs had died due to lack of food and attention, the heartless teenager dumped their bodies in a shoebox.

But police and animal cruelty officials swooped after a neighbour complained about the stench coming from his flat.

The surviving dogs were immediately taken from him and he was charged with animal neglect.

Yesterday at Edinburgh Sheriff Court, after admitting to neglecting the animals, Nesbitt was banned from keeping pets and fined £150.

But animal cruelty experts hit out at the lenient sentence, and called for a lifetime ban.

Doreen Graham from the Scottish SPCA said: “These puppies died a horrible and slow death.

“Every time they heard footsteps they would have thought someone was coming to feed them.

“In cases of neglect we would always look for a life ban to be imposed – owning a pet is a privilege, not a right.”

The court heard how officers from the Scottish SPCA had visited Nesbitt after a neighbour reported him walking a thin dog.

They found that the bitch – who had just given birth – was significantly underweight and told Nesbitt to make sure he fed her more.

But less than a month later, another call from a concerned neighbour over the smell uncovered serious animal neglect.

When officers entered the Clovenstone Gardens home, they found four pups and their mother locked in a cage surrounded by their own dog mess.

And they were horrified when they discovered that the other three pups had died and their tiny bodies were lying in a shoebox in the hallway.

Officers immediately took the whimpering mother and her surviving puppies into care.

Unbelievably, as they drove away with the animals, Nesbitt threatened to kill himself.

Yesterday, Victoria Good, acting for Nesbitt said her client had been “deeply distressed” about what had happened.

She said that Nesbitt had been unable to care for the dogs after suffering from severe depression after his relationship broke down.

She said: “He and his girlfriend bought the dogs together, when she left she took one of the dogs (the pups’ father) and he gave up.

“He knew they were there and he had to take care of them but he just couldn’t get up out of bed.”

She added: “He is deeply distressed about what happened to the dogs.”

Sheriff James Scott fined Nesbitt £150 and ordered that the dogs were kept from him.