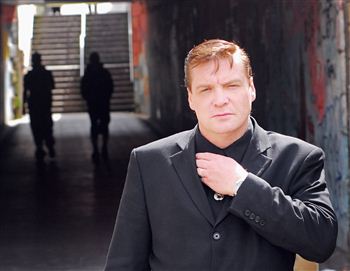 HOLLYWOOD hunk Ewan McGregor is being lined up to play former Death Row Scot Kenny Richey in a movie about his life.

Producers have already sounded out the troubled ex-con about the project and revealed McGregor is their number one casting choice.

Richey met with film producers last week about the film which is being made for the BBC.

The former US marine is no stranger to the movie business having starred in a short Irvine Welsh film which was shown at the Edinburgh International Film Festival last month.

This latest project would cover Richey’s time in the United States as a Marine before spending 21 years on Death Row.

The movie would also document his release and struggle to adapt to life since his return to Scotland.

Last night Richey said: “I was down in London last week discussing the movie with a film company.

“It will probably be based on my forthcoming biography as well as the book written about me by my brother Tom.

“Producers mentioned approaching Ewan McGregor to play me.  I think he would be ideal because he is Scottish, a brilliant actor and really charismatic.

“They are coming up to Edinburgh soon to spend time with me and find what I’ve been up to since prison.  The film certainly won’t be for children that’s for sure.”

London-based movie firm The Producers, are behind the project and hope to start filming next year.

One stumbling block for the project may be money however with the company refusing to pay Richey because of his criminal conviction.

He said: “I was paid for my story when I got out home so what they are saying doesn’t make much sense.

“I think they are just trying it on so I’m just waiting to see what they come back to me with.”

The Producers confirmed they were currently in negotiations with Richey over the film but refused to comment any further.

Richey was freed from Death Row in January after agreeing a plea bargain to quash his conviction for the murder of two-year-old Cynthia.

Edinburgh International Film Festival is to go ahead this year