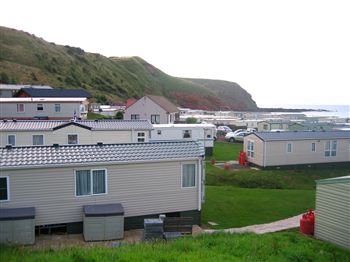 A YOUNG boy has been seriously injured after falling more than 30ft from a cliff face on the first day of his holiday.

The seven-year-old – named locally as Cameron – was climbing up the edge of the rocks at Pease Bay Holiday Home Park when he lost his footing.

His frantic grandmother – who it is believed he was away with – rushed to his aid and emergency services were called.

He was airlifted from the site in Cockburnspath, Berwickshire, and taken to the Sick Kids in Edinburgh to be treated for a fractured skull and broken leg.

Last night, police said his condition was serious but not life threatening.

It is understood that Cameron and his maternal grandmother had arrived at the holiday park early yesterday for a short break.

Visitors to the park told how the Scottish youngster had been playing on the beach while his gran sat inside.

And they said she had insisted the boy come back inside every half an hour to check in with her.

But as he climbed on the rocks just after 5.30pm he slipped and fell – landing in a sitting position 30 to 40 feet below.

Eyewitness Paul Brooke, 16, said: “I was at my caravan when I heard people shouting ‘Get down, get down’ so I went down to the beach and saw the boy perched on a ledge half way up the cliff.

“He looked like he was trying to come down but slipped and hit the rocks legs first, then smashed his forehead. He was doubled right over. I ran over to help and he was bleeding but conscious, and clearly in shock – shaking all over.”

Pease Bay resident Linda Paterson, 31, said she had spoken to the boy’s grandmother moments before she was informed of the accident.

She said: “Everybody is in shock. The boy and his gran only arrived today and we had just been chatting in the bar for about five minutes when Cameron came over to say he was playing on the beach.

“He seemed really excited to be on holiday. He was out enjoying the sunshine and she was letting him go out every half hour and reminding him to let her know where he was all the time.

“But it was raining earlier and it seems as though he just slipped from the wet rocks as he tried to climb up.”

The emergency services were contacted and an ambulance, coastguard units from Dunbar and Eyemouth, plus police and RNLI Dunbar lifeboats attended the scene.

But because of the injuries the schoolboy received in the fall, the services in attendance had difficulty reaching him.

Instead a Sea King helicopter was drafted in from RAF Boulmer, who transferred the youngster to hospital for treatment.

Ms Paterson added: “His gran was in shock. She ended up going in the helicopter to hospital with him. We have since heard that he is doing okay and wants to come back to get his toys that are still out on the beach.”

A Lothian and Borders police spokesman confirmed: “About 5.40pm on Tuesday 29th July 2008 a seven-year-old boy, who was staying at the Pease Bay Caravan Park, Cockburnspath, Berwickshire fell approximately 30 feet from a cliff onto rocks, whilst climbing.

“As a result of the fall the child suffered serious but not life threatening injuries and the emergency services were notified.”