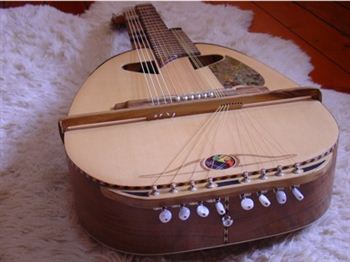 A TALENTED musician has combined his love for guitar, mandolin and bandurria by building his own unique instrument – the Combuitar.

Benny Tetteh-Lartey has handcrafted the unusual device himself, and incorporated 18 strings and three necks into just one instrument.

Originally from Ghana, the musician, who is currently attracting huge interest from the film industry in Hollywood, is a cabinet maker to trade and makes all his own musical pieces.

The idea for the Combuitar is inspired by Tetteh-Lartey’s musical idol, folk legend Roy Williamson.

The original Corries Folk Trio star also built his own personal instruments, combining a mandolin and a guitar into the ‘combolin’.

Another version the late star put together was a combination of a guitar and a 12 string Spanish bandurria.

The musical oddities were originally put together as a way to combine the array of instruments The Corries used on stage.

Mr Tetteh-Lartey, 42, said: “Roy Williamson is one of my heroes, mainly because he was a fantastic musician who also made his own instruments. I’ve always loved the sound of his combolin and I thought I’d have a go at my own version.

“I must have put hundreds of hours into making the combuitar, and after a few tweaks here and there it is sounding really good.

“I’ve played a couple of small gigs with it, and the audience reaction to the instrument has been amazing.

“Apart from a simple bass guitar I’ve never built an instrument before so, at first, I had to buy a book to learn the rudimentary skills.

“It looks quite big and cumbersome but it’s really quite light when you hold it, although I do have to sit down to play it.

Mr Tetteh-Lartey, from Loanhead, Midlothian, has had three record labels interested in his work recently including Columbia and Island, and the dad-of three is hoping one of them makes a move to sign him up.

He also managed to play a small set at the Chill Out tent at T in the Park after gatecrashing the stage a couple of years ago.

He said: “I’d been promised a set at T in the Park but a couple of days before it was due I was told it was off.

“I was livid and decided to go along to the festival anyway and just blag my way on stage. Nobody seemed to click that I shouldn’t be there, and after I finished I was invited back to play the following year.

“Maybe at next year’s festival I can thrill the crowd with my new combuitar.”