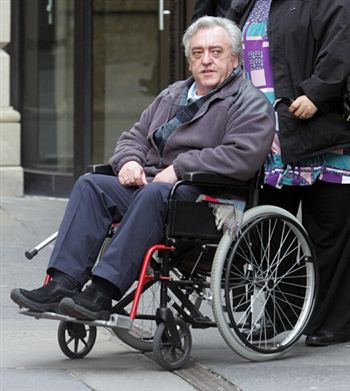 A DISABLED man has hit out at “stupid” prosecutors who hauled him before a sheriff TWICE after getting him mixed up with a man who had the same name.

John Taylor, 59, was arrested and driven over 100 miles in a prison van after a warrant was granted for John Alexander Taylor, who is accused of fraud.

He appeared in court charged with the elaborate scam and was given another date to return, despite his protests that they had got the wrong man.

And he was then bailed and left to make his own way back to his  Bedlington, Northumberland.

Bungling prosecutors only realised their mistake when John and a relative had made the trip to Edinburgh for a second time.

Last night, John fumed: “I couldn’t believe it, I didn’t know a thing about this and I was dragged down to the police station and taken to court.

“I tried to tell them they had gotten the wrong man, that this was not my name, but nobody listened to me.”

The first John heard about the alleged fraud was when cops arrived on his doorstep and told him there was a warrant out for his arrest on September 10th last year.

He was taken to police station and held for several hours before being transported to Edinburgh to appear the following day.

He was bailed and given dates to return to the court on July 11th this year.

And the mistake wasn’t even picked up at his second appearance where he was told he would have to answer claims he had conned people out of more than £10,000.

Prosecutors even set dates for his summary trial to go ahead.

Only when defence lawyer Nigel Bruce pressed prosecutors for closed door discussions did the mistake come to light and investigations to catch the correct suspect began.

Now he has been caught and will appear charged with the fraud next month.

But John is furious that he was arrested at his home and held at a police station in Northumbria before being carted in a prison van 110 miles to Edinburgh.

He blasted: “I have had months of hell, stress and worry over this, all because some stupid idiot couldn’t do their job properly.”

And, he said, after he appeared from custody and was bailed in September last year, he was dumped miles from home while distraught family members had to make the round-trip to take him home.

To add insult to injury John, who survives on disability allowance, had to make his own way to Edinburgh for the July hearing to clear his name.

He said the grueling journeys had had a “terrible” impact on his already fragile health.

Now John has been told he is no longer accused of the crime, but claims he has NEVER received an official apology or notice to say he will not be pursued again.

He added that he was considering legal action over his treatment.

A Crown Office spokeswoman said: “A petition warrant bearing the correct name and date of birth of the person sought in connection with these offences was issued by the Procurator Fiscal at Edinburgh.

“Mr Taylor was arrested on that warrant in what was a case of mistaken identity. It is unfortunate that this error occurred and it must have been a very difficult ordeal for Mr Taylor.

“The arrest of persons upon apprehension warrants is not a matter for the Crown but as soon as the Procurator Fiscal was made aware of the mistaken identity of the person apprehended by the police in this case immediate steps were taken to rectify the situation.”

And they confirmed that he is no longer accused of anything.

The spokeswoman added: “We can confirm that John Taylor who appeared in respect of this matter on 11 July 2008 at Edinburgh Sheriff court is no longer charged.

“As soon as the position regarding his identity was confirmed the Procurator Fiscal took immediate action to resolve matters as quickly as possible and the case against him was deserted without his having to appear again in court.”

But they accepted that they had not been in contact with John to apologise for the ordeal.

She said: “All communication with Mr Taylor has been through the solicitors who represented him when the matter was deserted. “

4,000 crime probes “dropped” because of late reporting by Scottish police