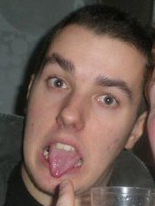 A TOP scout has died after plunging 50ft to his death on Arthur’s Seat in Edinburgh.

The teenage student had been out with friends before deciding take a detour along the precarious hillside.

Police believe he lost his footing and say his death is nothing more than a tragic accident.

Mark, who is originally from Inverkip, Inverclyde, was a keen climber and had recently surpassed the 60,000ft milestone.

He had been enjoying a night out with friends in Edinburgh’s city centre before leaving them to make his own way home in the early hours of September 18.

Cops say he had ventured up Arthur’s Seat and was walking along a precarious trail beneath Salisbury Crags when he fatally lost his grip.

Mark, who lived in the city’s Haymarket area, plummeted 50ft down the steep hillside before landing in some sharp gorse bush below.

He lay undiscovered until a walker made the grim find 24 hours later last Saturday morning.

He had been in the Scouts since he was ten years old before becoming a youth leader with the 85th First Inverkip group.

He said: “I knew him extremely well. He was a smashing lad and one of Scouting’s nicest sons.

“It was a dreadful accident. It’s just a shock.

“He was a real achiever and received his Chief Scout Gold Award and Duke of Edinburgh Silver Award.

“He was one of the few scouts to achieve the Double Everest Award where he climbed the equivalent of 60,000ft.

“He was a hero and an inspiration to many, and a lot of young people will be badly affected by his death.

“Mark followed the real scouting path and was friends with lots of people. He kept the scouting promise to do his best.”

A Historic Scotland spokesperson said: “The terrain of Holyrood Park is diverse, open and in places extremely challenging and exposed.

“We advise people to keep to the paths and not attempt to stray into territory that could be potentially dangerous to them.

“It is important that people using the park are well equipped and prepared for any activity they wish to undertake.

“If a user of the park has any doubt about what the landscape in the park may encompass or available paths and walking routes, our Holyrood Park Ranger service can provide information.

“The user can then make planned, careful and responsible use of the park, at their own risk.”

Last night Mark’s devastated mum, Karen Muir, said she was too upset to comment any further.

A spokesman for Lothian and Borders Police said: “This appears to have been a tragic accident.

“There are no suspicious circumstances and a report has been submitted to the procurator fiscal.”

Two years ago a Taiwanese schoolboy also died after falling to the bottom of Salisbury Crags.

Scottish university to team up with BT for 5G project