POLICE officers will soon be patrolling the Scottish Parliament on electric-powered bikes.

The small, almost-silent motorcycle can be spotted touring the streets around the parliament.

And Lothian and Borders Police hope that the eco-friendly scooters – which have a top speed of 62 mph – will soon replace petrol patrol cars – covering up to 30 miles every day.

Dignan McCulloch, fleet manager of the force, said it was important to cut down on emissions due to the high amount of miles covered by officers on the beat.

He said: “We have been looking at ways to downsize the fleet and reduce the carbon footprint. One of the ways of doing this is to look at electric bikes with zero emissions.

“The officers are quite keen to give it a try and those that have tested it are really happy with its performance.

“It’s early days for us but it all looks positive.” 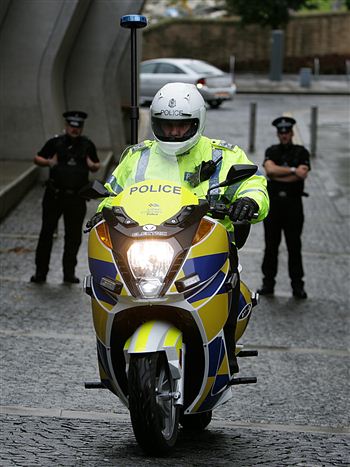 The £6,500 American-produced bike is powered by a battery which can travel about 60 miles before needing recharged.

The battery takes around three hours to charge and can be plugged into any household socket.

Lothian and Borders have only bought one of the Vectrix electric maxi-scooters but are hoping to roll the scheme out to train more officers.

The force then aim to have a police presence on the bikes at Edinburgh Airport and the Royal Infirmary.

Mr McCulloch said: “It looks the part and we are looking forward to putting the bike into service and exploring other opportunities.

“There are a lot of pedestrians around the parliament and I think they should be pleased to see that we do have an interest in our carbon footprint while also taking our duties very seriously.”

“The Parliament continually aims to improve its environmental performance and this new scooter is a great example of the measures that can be taken to reduce our carbon footprint.”