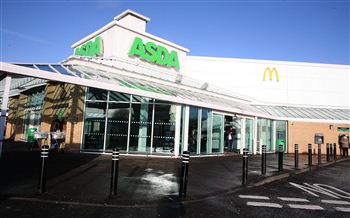 ASDA have come under fire after unveiling plans to erect a massive 60 foot wind turbine in one of their store’s car parks.

The supermarket giant has said they are keen to go green by installing the turbine next to their Kirkcaldy store.

The machine’s blades will span almost 15 feet and will provide enough green energy to power half the store’s checkouts every year.

But the superstore giant’s planning application for the turbine to Fife Council has sparked fury among nearby residents.

The 19 metre white and grey installation is to be sited next to the superstore’s petrol station, and last week Asda circulated details of their plans to local residents.

But fears have been raised the huge turbine will cause too much noise at nights.

One worried resident said: “I can’t believe Asda are serious about putting this monstrosity up in our town.

“Apart from the noise, which will be considerable, my biggest fear is when I come to sell my house. The depreciation on it is going to be a huge problem.

“I mean, who wants to see a big, ugly turbine right outside their window.

“I’ve already been in touch with my local councillor and I am seriously thinking of boycotting Asda altogether if they go ahead with these plans.”

Labour councillor Kay Carrington admitted she also had some reservations about the project.

She said: “I’ve got every sympathy with Asda and their green plans, but to place a turbine right in the middle of the town seems a very strange decision.

“I’ve been inundated with calls over the weekend from worried residents who are concerned about the noise the turbine will generate. There is also the visual aspect which is worrying a few people.

“I’m all for new technologies but there are other green issues, like putting doors on their fridge cabinets, which should be addressed first before the company decides to start putting up wind turbines in the middle of the town.”

However, Lisa Rooke, Asda property communications manager for Scotland, has said the only noise would be the swish of the blades turning in the wind as there is no mechanical gear box.

Ms Rooke said the massive blades also had a very low rotational speed and the tips were specifically designed to reduce noise.

She said: “Our commitment to reducing the amount of energy and fuel we consume enables us to use the savings to deliver quality products and services to its customers.

“The proposed wind turbine for our Kirkcaldy store will generate approximately 15KW of electricity, enough to power a minimum of seven homes within the Kirkcaldy area.

“We are extremely committed to implementing measures that reduce our impact on the environment, reduce our carbon emissions and improve the energy efficiency of our stores.

“We look forward to rolling out our work in this area and hope that we are able to deliver these smaller-scale wind turbines at our stores to continue this commitment.”

Asda’s plans are part of their pledge to reduce carbon emissions from their stores by 20 per cent by the year 2012.

Friends of the Earth Fife are one organisation backing the superstore’s turbine plan.
Claire Reid said: “We welcome Asda’s attempts to reduce its carbon emissions.

“The noise generated by modern turbines is negligible especially compared to that of busy roads in the area.

“We would, however, like to add that Asda could be reducing its energy consumption in far simpler ways such as fitting doors to its fridge and freezer cabinets.”