A SHERIFF sentenced a man based on the pervert’s own sick-minded account of his crimes.

Sheriff James Farrell jailed depraved Hugh Ferrier, below, for a year after reading the 67-year-old’s own description of a decade of abuse when prosecutors forgot their papers. 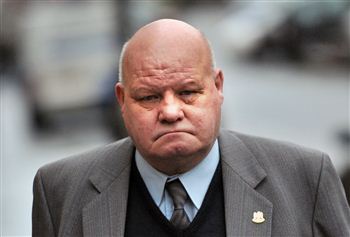 Instead of recalling the case when the Crown were prepared to describe the crimes Sheriff Farrell praised Ferrier’s “open” account despite there being NOTHING to challenge it.

Ferrier admitted three charges of lewd and libidinous behaviour towards children last month at Edinburgh Sheriff Court but his sentence was deferred until today for background reports and for a description of his crimes.

But when his case was called, fiscal depute Neil Allan admitted that he “knew nothing” of the case.

Mr Allan said that he had asked colleagues to find copies of the papers relating to Ferrier’s campaign of abuse, which spanned nine years during the 1980s and ‘90s, but had not been given them yet.

Normally the case would be recalled in the afternoon or another day when prosecutors were ready but Sheriff Farrell, after expressing his annoyance at the situation, pressed on with the sentencing.

He told Ferrier: “We are proceeding on the basis of your own account from the social enquiry report.”

A Crown Office source said he was “amazed” at the bizarre decision.

Ferrier admitted grooming and abusing the boys, as young as six, systematically and repeatedly over the course of almost a decade.

But before sex offenders are sentenced they must meet a social worker and describe the events of their crimes in order to ensure they fully accept what they have done.

It was this account that Sheriff Farrell read instead of the full and factual description of times, locations, actions and impacts of the crimes involved usually relayed by prosecutors.

Sheriff Farrell said: “These are serious charges, they involve the systematic sexual abuse of three young boys in the 1980s and 1990s. These boys were groomed by you and the abuse was not trivial.

“The abuse left its mark on these men and it’s because it left its mark that it came to light because they are still suffering from what you did to them.”

Ferrier’s solicitor, Stuart Carson, asked that Ferrier was not jailed as his age would make him vulnerable.

Sheriff James Farrell replied: “As were his victims.”

When one of his victims revealed his year’s of torment, he also told officers of another boy who suffered at Ferrier’s hands.

Police interviewed Ferrier who admitted everything, even confessing to another child he abused.

Defending, Mr Carson added: “He has cooperated with police and the social work department and the offences are of some age now.”

Sheriff Farrell said: “I don’t see how that can be of much mitigation, the reason for the delay is that they were intimidated away from coming forward.”

But he added that the “open and full” account given by Ferrier was the main reason he was proceeding without any guidance from prosecutors.

Sheriff Farrell sentenced Ferrier to 18 months in prison, which was reduced to a year because of his early plea and also put him on the se offenders’ register for seven years.

Once free, Ferrier will not be allowed unauthorised contact with children under 16 years old and will have to attend group sessions designed to prevent him targeting youngsters as part of a three-year extended sentence.

Retired Ferrier abused the first boy, who was aged between six and 14 during the seven years of abuse, from 1983 to 1990 at his home in Edinburgh’s Calder Gardens.

The other boys, also abused at his home, were aged between seven and 13 and seven and eight, when he abused them up until 1992.

Ferrier’s solicitor Stuart Carson said the abuse had come to light earlier this year when one of the perverted pensioner’s victims told a girlfriend about the abuse and decided to tell police.

He added that Ferrier had been married in 1994 and there had been not further instances of abuse since that time.

After the hearing a Crown Office source said they were “amazed” at the sentence going ahead.

He added that prosecutors would have been “more than willing to come back” in order to relay an accurate account.