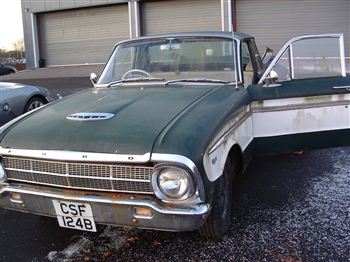 THE HUNT to find Scotland’s ugliest car has finally come to an end – just as the battered jalopy fell apart.

A classic green and cream 1964 Ford Falcon, which has lain in its owner’s garage for the last four years, has picked up the unwanted motoring accolade.

But the beat-up banger is now to receive a major renovation as part of the winning award.

The Pimp-My-Banger competition was organised by car firm Motorpoint who scoured the country looking for the country’s worst car.

The rusting Ford Falcon, complete with a bird’s nest in the engine, beat off competition from a Renault 5 GT Turbo that has had its engine replaced three times and a 1961 Hillman Husky that was in a state of disrepair. 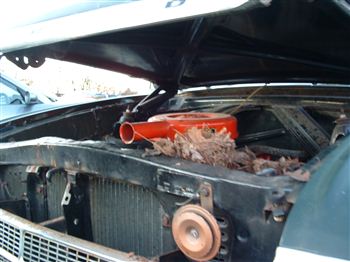 But no matter the state of the Falcon, owner Stuart Simpson, 58, says he has always seen his car as “a thing of beauty”.

The retired electronics worker from Bo’ness, West Lothian, bought the car seven years ago as a project to work on in his spare time, but found the spare parts hard to come by.

He said: “It was so horrible to drive and the engine sounded like it was damaged the whole time.

“However, I don’t think that it’s ugly at all, I think it’s a thing of beauty.”

After sitting in the garage for over four years the Falcon was beginning to rust away and as Motorpoint employees began to move it for the renovation the back axle collapsed.

A spokesperson for Motorpoint said: “We tried to weld it to prop it up for the official winning photographs and the whole thing fell apart.

“Luckily though, as the winning car, it will undergo a full makeover and be fitted out with a new paint job, engine, stereo and even DVD player.”

The car will also have a state-of-the-art satellite navigation installed.

Motorpoint were hoping to have the Falcon finished in time for Christmas, but the unexpected week’s worth of welding work has put the official presentation back to January.