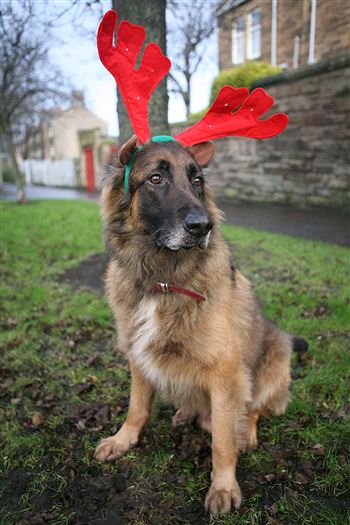 ALFIE the dog has been banned from Christmas – because he is too FAT.

The German Shepherd will miss out on all his favourite treats this year after being put on a strict diet in a bid to shed more than three stone.

The podgy pooch tips the scales at nine stone after gorging on biscuits, cheese and family leftovers on a daily basis. 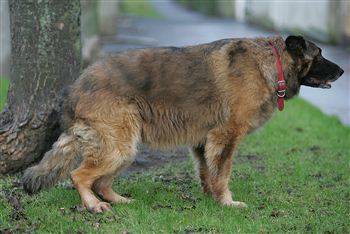 But now owner Helen Smith has banned him from having any treats this year as he flies the flab for Scotland in a pet’s fit club contest.

Helen said: “Last year Alfie polished off his Christmas dinner as well as all our leftovers. He ate turkey with all the trimmings, he loved the trifle and he even got stuck into some Christmas pudding.

“But we’re taking his weight-loss programme very seriously and there will be absolutely no treats for this year.”

The seven-year-old mutt has lost a whole stone since being picked for the fitness regime run by animal charity PDSA.

But he still has a long way to go in reaching his target weight of around six stone and his owner insists Christmas is a crucial time.

Helen, 51, will be spending the holidays with her husband James and four children – who will be bringing their own pets.

Helen explained: “The main goal for us at the minute is Alfie’s weight loss but we’re going to have a full house at Christmas with the children, six dogs and four cats.

“It’s going to be a nightmare because Alfie’s a cheeky little monkey and steals food from the other dogs’ bowls. I’m going to have to stand guard and make sure he doesn’t get up to his old tricks.”

The Smiths rescued Alfie three years ago when he was a bag of bones and Helen insists she just wanted to fatten him up.

She said: “The main reason he is overweight is because I just found it so difficult to say no.

“He stands there in the kitchen staring at me when I am making food, he’s intimidating and I just feed him the scraps.”

It was a routine visit to the vet that spurred Helen on to confronting Alfie’s rocketing weight.

She said: “My daughter was with me at the time and she saw a poster for the PDSA fit club contest.

“She told me Alfie should enter because he is fat and now here he is as the only Scottish animal in the finals.”

Vets at the PDSA have put eight of the UK’s fattest pets on a 100-day diet and the champion will win a pet-friendly holiday.

And Helen is hoping Alfie will be the biggest loser and shift the excess inches.

She said: “ I know Alfie is fat and we are all trying really hard to help him get down to his six stone target.

“We’re all taking him for walks and avoiding those puppy dog eyes of his when the biscuits are out.

“The vet told me I can give him a wee taste of Christmas by rubbing some turkey in my hands and letting him lick them. It seems unfair but that’s the only way he’s going to get back on track.”