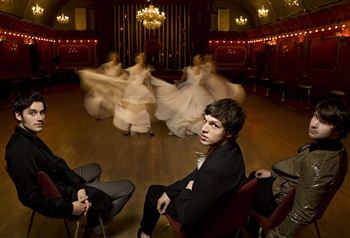 FEW bands can claim to have picked up celebrity fans like U2’s Bono or Welsh crooner Tom Jones in the short space of a year.

But Friendly Fires will cap off the year of their lives by seeing in the bells on stage Edinburgh’s Hogmanay concert on Wednesday.

The hotly-tipped St Albans indie three-piece have vowed to stretch the 2009 celebrations out over “three wild nights of pubbing and clubbing” across the capital.

Singer Ed Macfarlane said: “We’ve got our first week off for over a year so we’re going to milk every second of it.

“Edinburgh is a beautiful city and we’re still stunned to be asked to play at the foot of the most famous castle on the planet.

“The worst thing about New Year’s day is waking up with a hangover, so we plan to not sleep for three wild nights of pubbing and clubbing.”

After a summer packed full of appearances at festivals including Glastonbury, Reading and Leeds, the band’s debut album rocketed into the top-40.

An appearance on Jools Holland’s show then spawned a steady stream of famous fans, including Snow Patrol’s Gary Lightbody, who asked the band to support them on their UK tour.

And DJ Edith Bowman proclaimed Macfarlane’s dancing as “the funkiest and sexiest I’ve ever seen.”

But it wasn’t until the legendary Tom Jones approached the frontman to complement his bands’ music – and his moves – that he was truly star struck.

Ed said: “Tom Jones came up to me and asked to join the band because I’d stolen his dance moves.

“I was amazed but he said he liked us so we gave him an album – it’s funny to think Tom Jones might have listened to your album.”

The Welsh crooner isn’t the only living legend to embrace the group’s danceable-yet-ambient sound, as U2 frontman Bono also approached the band after a recent gig.

Ed said: “We got to play some massive venues supporting Interpol, and after playing the Dublin RDS we saw Bono backstage.

“He just started talking about us being from St Albans and it turns out he’s also played a gig in this tiny venue called the Horn.

“Stuff like that just makes you realise all the hard work can get you places.”

Friendly Fires are due to be first band to play Princes Street’s iconic Ross Bandstand in 2009, after Paulo Nutini and Groove Armada.

Message from the Skies returns to Edinburgh