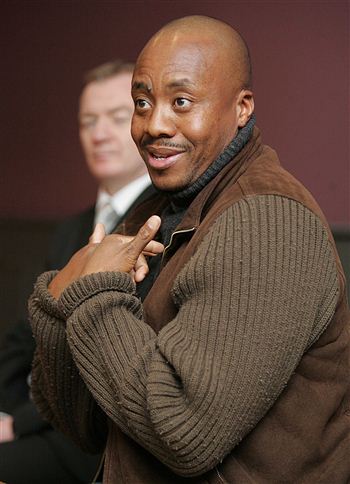 THE brother of a nurse who was discovered in her car boot after 11 days missing says their mother was “shocked and frightened” she could have been dead.

Her brother Refilwe, 35, spoke yesterday of the “crying, hugging and kissing” when she opened her eyes to see him by her hospital bedside.

But police put him under strict instruction not to reveal any detail of Miss Makola’s ordeal, fearing it could throw the court case into jeopardy.

He said: “It was very difficult and our mother was struggling; she was very shocked, frightened in fact.

“But I never doubted that she was alive.

“I’m not in a rush to ask what happened to her, I’m taking it nice and slowly and not going to pressure her. I’m not allowed to comment on what she said happened but I’m just concerned about her wellbeing.”

The nurse was reported missing when she failed to show up for her shift at Edinburgh Royal Infirmary on December 18.

Her worried hospital colleagues sparked a nationwide hunt which ended when police found her locked in her own car 20 miles from home in Airdrie.

Her brother Refilwe flew into Scotland to be by her bedside at Monklands hospital on Tuesday, where she is said to be making a good recovery.

Having spent New Year with his sister in the hospital, Refilwe spoke of the moment his sister realised he had flown from his hometown of Sasolburg to be with her.

He said: “When I first saw her, she laughed and opened her hands to hug me and she ended up being more concerned about me and how I travelled and instead of me being concerned about her being lost.

“I don’t know how to explain but there was a lot of crying, hugging, kissing and embracing.

“It was somehow tough because we were eager to know what happened and we ended up accepting that it is better to concentrate on Magdeline being alive than thinking of other things.

“But it was nice for her to see people. She’s fine now; she can talk and she is doing very well. She was very excited to see me.

“It was difficult for us because we were very far from Magdeline and we didn’t come immediately because of the flight schedules.”

As a Christian family, he said they prayed for her safety every day and had support from churches who visited the family home.

When asked how Magdeline survived her ordeal, her brother said: “She is a strong character but also a very private person.

“She is not the type of person to leave the house without telling anyone where she is going; that is why many people started to raise eyebrows when she was missing.

“We are a Christian family and were always close together, united and praying a lot.

“A lot of churches came to the house to pray with us, we were getting support from the community.

“That gave us more hope and helped us a lot in terms concentrating and being able to handle the pressure of Magdeline not being there.”

It is uncertain when the nurse, who lives in Livingston, will be allowed to leave hospital, or even whether she will stay in Scotland.

When asked if the ordeal had put her off Scotland, her brother said: “I’ve never even asked her about whether she plans to settle.

“We are concentrating on her fitness, so we didn’t go much into whether she will stay or leave.

“She is the only one who will decide on that issue because she has stayed in Scotland and knows how better it is for her.

“But she is a person who loves new challenges and is always eager to experience new things.

“She started enquiring about moving abroad in 2002 and one of the agencies in South Africa was looking for people to come because there was a niche for nurses here.

“Magdeline managed to get the opportunity to come to this side and she was very excited to come from Africa to the UK.”

He was also keen to thank the media and Lothian and Borders Police for appealing for information when Magdeline was missing.