A MAN who stabbed himself in the neck and chest with a knife in front of a nine year-old boy has avoided a jail sentence. 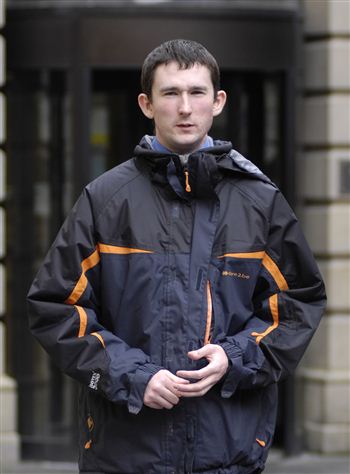 Gordon McMillan, 25, had asked the terrified child to stab him with the blade but began hacking and slashing at himself.

The young boy, who can’t be named for legal reasons, fled a flat in horror as McMillan inflicted life-threatening injuries on himself with a knife.

Edinburgh Sheriff Court was told that the boy could hear “slicing” sounds and immediately ran to his home to tell his family what had happened.

Today (Mon) McMillan was put on a 15 month probation order.

Police officers and paramedics raced to the scene and found McMillan covered in knife wounds with the blood stained knife by his side on March 15 last year.

He was taken to Edinburgh Royal Infirmary and spent five days in intensive care for what medics said were “life threatening injuries” to his chest, stomach and neck.

McMillan admitted breach of the peace by scaring the youngster.

A not guilty plea to a charge of indecent behaviour towards the boy was accepted by the Crown.

Fiscal depute John Kirk told the court that McMillan had met the child twice before the bizarre stabbing.

They had been collecting sponsorship money before McMillan took him to his flat in Westerhailes Park, Edinburgh.

But the boy became upset after McMillan pulled-out a knife and began to talk about self-harming with the child.

Mr Kirk said: “The panel started to talk about self-harming, that obviously upset the boy and he was further upset when the panel produced a knife.

“He offered the knife to the boy and asked him to stab the panel with the knife.

“The boy refused this offer and fled the flat in tears.

“He could hear what he described as slicing noises and ran out the close and bumped into two of his friends and they immediately took the boy home.”

Mr Kirk said that the lad’s mum and sister went to McMillan’s flat where they found him seriously injured and called police and an ambulance.

Mr Kirk said: “He was bleeding with the injuries and had a blood-stained knife present.

“Police and an ambulance were called and it was abundantly clear that the panel was suffering from injuries which, left untreated, had the potential to be life threatening.”

Medics said McMillan had slashed and stabbed at both sides of his chest, his thigh and his stomach.

He also had neck wounds which the casualty doctor said put his life at risk.

McMillan spent over a month at the Royal Edinburgh Hospital psychiatric facility before doctors confirmed he was fit to stand trial.

Sheriff Neil Mackinnon said: “He could do with some structure in his life.

“But this is a serious matter, so a probation order will do.”

Veteran Dad shares words of wisdom ahead of Father’s Day