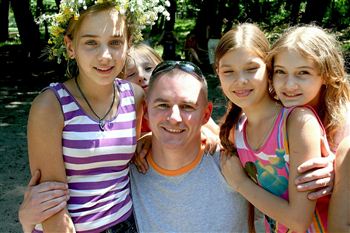 SUPPORTERS of a Scottish football team have been hailed as heroes after helping to raise thousands of pounds for some of the world’s poorest children.

A charitable appeal was set up by fans of Hibernian after they were moved by the plight of Ukrainian orphans.

Now the Edinburgh club’s followers have been visited by Ira Polyashova, who is funded by the Dnipro Appeal to promote the welfare of children in the Ukraine, and who has come to the Capital to thank the generous supporters in person.

The fans’ appeal has helped to improve the lives of kids in three orphanages, a TB sanatorium and a baby centre for young mothers.

And even though their team was thrashed 5-1 by the Ukrainian team, the travelling Hibs fans took time out to visit orphanages and help cheer up the local kids by handing out strips and scarves.

Jim, a former-Scottish international 400 meter runner, said: “It was through the UEFA Cup in September 2005, when Tony Mowbray took his Hibs side to the Ukraine to face Dnepropetrovsk, a group of Hibernian supporters took time out to visit a local orphanage and pass on the best wishes of all Scottish football fans.

“The delight shown by the kids, and the clear pleasure that the visit from the Hibernian supporters brought, warmed the hearts of everyone involved. And so was born, The Dnipro Appeal.”

The Appeal has now expanded to relieve poverty, advance the educational opportunities and promote the welfare of the orphans throughout the poverty-ridden area.

Ukrainian Director in the Field, Ira Polyashova, who is also assisted by her two daughters Natalia and Masha, arrived in Edinburgh this week to give thanks to the Hibs fans changing lives in her homeland.

Ira said: “Through the kindness of these football supporters we have been able to make a real difference to the lives of some of my countries most needy.

“Thanks is too small a word for the way we all feel towards these generous people who have been taken into all our hearts.”

The Dnipro Appeal’s website can be found at www.dniprokids.com.