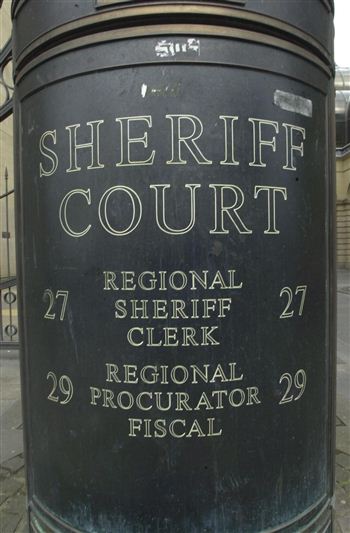 A DRINK drive cop who smashed his car while almost three times the legal limit has been banned from driving.

Gordon Glass, 45, crashed his Renault Clio into a barrier on a busy dual carriageway as he drove to Tesco to buy cigarettes.

The former Lothian and Borders officer, who quit the force after the incident, has now taken-over a pub in a popular tourist town.

At Edinburgh Sheriff Court he was banned from driving for 18 months.

Glass, who had five years service with the force, was also fined £750 after pleading guilty to driving while over the legal alcohol limit on November 24, 2007.

Fiscal depute Michelle Young told the court how and off-duty officer had passed a wreck on the A7 just outside Newtongrange in the early hours of the morning.

Miss Young said: “It was apparent that the 53-plate vehicle had collided with the wall at the near side of the road and had sustained extensive damage.”

He stopped to check if the driver was injured and found Glass trying to move the red car.

After staggering from the smashed vehicle the off-duty officer noticed the smell of alcohol on Glass’ breath.

And when he realised that the former officer had not reported the incident, he called in two on-duty colleagues.

Glass failed a road-side breath test and was taken to Dalkeith Police Station where further tests showed he had 101 microgrammes of alcohol per 100 millilitres of breath in his system.

His solicitor, David Hunter said his client had resigned from the police following the crash and had taken tenancy of public house in Callander in April last year.

Mr Hunter said the first offender had been on sick leave from the force and was suffering from depression at the time.

He said: “He had split from a previous partner in February 2006 and there had been some difficulties over debts and maintenance for those children.

“He was off work following an operation on his knee and was after diagnosed as suffering from depression.

“There had been argument with his new partner and he had gone out to buy cigarettes.”

Mr Hunter said the local licensing board may now look at his suitability to run a pub.

Sheriff Fiona Reith disqualified Glass, who now lives in Lochearnhead, from driving for 18 months and fined him £750.