By Cara Sulieman
TWEETERS across Scotland are meeting up to celebrate the internet sensation and raise money for charity.

With over 175 parties celebrating Twitter across the globe later this month, Scotland’s two biggest cities are getting in on the act.

Both Edinburgh and Glasgow will be hosting the parties, dubbed Twestivals, to raise money for charity: water.

Organised in a short space of time over Twitter, the parties show the power of the website and its concept.

Jim Wolff, one of the organisers of the Edinburgh Twestival, got involved after hearing about it on the website.

He said: “There was a Twestival in London last year and I was following the feed for Twestivals on my Twitter.

“A message was posted saying that they were looking for people to organise Twestivals around the world and I instantly said I would do it.

“It has been a lot of work to organise it, but one of the great things about Twitter is that you get instant results. We set up a profile for the Edinburgh Twestival on the site and have used it to post requests for things like raffle prizes.

There is a huge variety of technically themed music taking place on the night, with performances from Peter Gregson, an electronic cello player, and Amazing Rollo, an artist who creates music with Wii consoles. 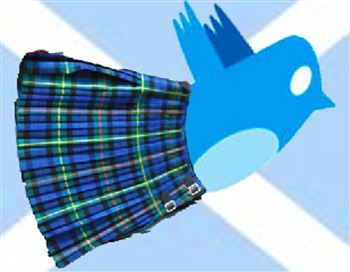 But Jim wants to make it clear that the night won’t all be about computer and technical know-how.

He said: “We wanted the night to have a tech edge without being too geeky. There will be some stuff that involves a lot of software and computers, but it will be enjoyable too.”

With plans afoot to show all of the Tweets from and about the night to the crowd, Twitter will never be too far from the minds of the audience.

Twitter is a micro-blogging site where users can post messages under 140 characters. Similar to the status update on networking sites such as Facebook and Bebo, users let the people following know what they’re up to.

With celebrities like Stephen Fry, Gordon Brown and Barack Obama all regularly updating their Twitter, it has become a social phenomenon overnight.

In Glasgow, their Twestival is being held at the Sith Café in the city’s west end and includes a knitting guessing game, amongst other things.

Twestival 2009 takes place on Thursday February 12 at Hawke and Hunter in Edinburgh and at the Sith Café in Glasgow.

All proceeds will go to charity: water, a charity that helps bring fresh, clean water to communities in developing nations.

Subo to play for Obama family at the White House