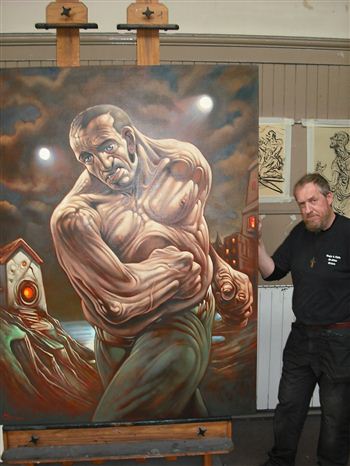 Howson’s ‘Nimrod the Hunter’ measures six feet in height and is the most recent in the troubled artist’s biblical series.

The stunning oil on canvas is up for sale for an impressive five-figure sum at the greens and blues gallery in North Berwick.

Gallery boss Bryan Ross is delighted an artist of Howson’s stature has chosen his gallery to premier his new work.

He said: “We’ve had a good working relationship with Mr Howson for a couple of years now and I’ve sold a good few of his paintings.

“When I fist saw the Nimrod I was totally blown away. It certainly has that ‘wow’ factor that art collectors look for.

“The painting has a five-figure price tag on it, and even though we’ve only had it for a couple of days I’ve already had three firm notes of interest.

“The painting was only completed last Friday, and I’m delighted Mr Howson has chosen my gallery to show and, hopefully, sell it.”

Howson’s powerful, figurative work has seen him become one of Britain’s foremost artists of his generation.

Famed for his ferocious temper, the artist’s religious themes are said to be linked to his alcohol and drug addiction, for which he was treated at the Castle Craig Hospital, near Peebles, in 2000.

Howson, 51, converted to Christianity soon after entering the hospital and it is has also been revealed he suffers from Asperger’s Syndrome.

His work is a favourite among the stars with his paintings appearing in the collections of various celebrities such as Sylvester Stallone, David Bowie, Mick Jagger and Madonna.

Paintings by Howson have also been used on the front covers of albums by musicians The Beautiful South, Jackie Leven and Live.

A former official war artist to the Imperial War Musuem during the conflict  in Bosnia, he has previously said he has become so depressed at times he has contemplated murder followed by suicide.

He claims he has become so enraged that he has been on the point of strangling people before pulling back from the urge.

Several of his best-known works depict violent characters and he said he believed violent men may be drawn to them.

His latest piece, Nimrod, is said to be the founder and king of the first empire after The Flood and is traditionally regarded as the great grandson of Noah, the creator of the Tower of Babel.

Teacher struck off after axe attack