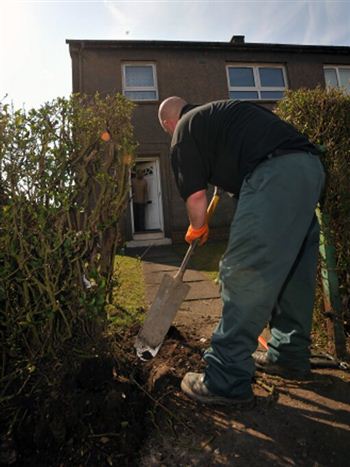 BRITAIN’S Got Talent’s singing superstar Susan Boyle was branded a health and safety risk yesterday – by her local council.

Worried local authority officials feared that the rickety old fence outside her modest council home in Blackburn, West Lothian, simply wasn’t up to the job of coping with the hundreds of well-wishers and media.

So they rushed out workers to replace it and her gate before her next appearance on the hit ITV show with a brand new set.

The star has lived her whole life in the four-bedroom house in Blackburn and the rusting fence and rickety gate in the garden had seen better days even before her new found popularity.

Lucky council worker Steven Carroll even got offered a cup of tea by the woman herself while he toiled in her garden in the full glare of the Spring sunshine.

He spent more than four hours trimming back the hedge, pulling out the old green fence and putting a studier wooden one in its place.

His West Lothian Council pick-up truck loaded with timber was parked outside Susan’s house yesterday (Monday) morning as he he got on with the task in hand.

The fencer, who has worked for the council for more than 50 years, laughed off the idea that Susan was his most famous customer.

But he said his partner and two kids were backing her all the way.

He said: “They love her and watch the show. Everyone in Blackburn is enjoying watching her because everyone knows who she is.

“I don’t know why this is getting done today I just got the call and came along.

“I knew straight away it was Susan’s house. I assume she knew I was coming because she has been out to say hello.”

Steven added the new fence would not give the star any more privacy as it would be the same height.

He said: “I’m going to trim the hedge back, pull out the old one and put a new wood fence in its place. It should be about the same height.”

Susan popped her head out of the door when Steven started hammering and digging outside on her path.

But she quickly nipped back indoors after offering him a cup of tea.

Although she is West Lothian’s most famous export the council insists she is not getting VIP treatment.

Instead they say the fence was replaced as part of an ongoing fencing initiative.

But they added that because of the number of people going to the house it had been moved up the priority list.

A West Lothian Council spokesperson said: “There is currently an ongoing council-fencing programme being carried out in the area, and Ms Boyle’s council property is one of many that will be repaired in the coming weeks and months.

“Given the large number of people currently surrounding Ms Boyle’s council property, including many young people, we felt it necessary to quickly ensure her fence was safe and secure to withstand the hundreds of well wishers who have been visiting her home.”