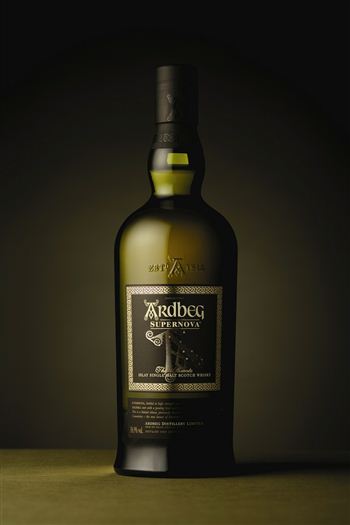 AN ICONIC whisky distillery who have won the World Whisky of the Year two years running have sold 3000 bottles of their new product in a record 112 minutes.

Enthusiasts and collectors from across the world rushed to snap up the rare bottles of Ardbeg Supernova when they were made available online.

And the tiny Islay distillers have now decided to launch the new £80 single malt worldwide.

The record sale of the 3000 bottles is the fastest-selling whisky in the company’s 194 year history.

Members of the Ardbeg Community – a group of 47,000 whisky enthusiasts from 112 countries – snapped up the new whisky after the company decided to release 3000 advance bottles.

The company says their new whisky is “the peatiest Ardbeg ever” and is created from the most heavily peated Ardbeg stocks of varying distillation dates.

World Whisky of the Year Award

The new malt has peating levels well in excess of 100 parts per million (milligrams per litre) making it the peatiest whisky Ardbeg has ever produced.

It is 40 per cent more peaty than the distillery’s best-selling Ardbeg Ten Years Old, which in 2008 was awarded World Whisky of the Year by world-leading whisky expert Jim Murray.

Dr Bill Lumsden, Head of Distilling and Whisky Creation, explained: “We expected a good reaction when we offered a limited amount for sale online recently but couldn’t believe it when all 3000 preview bottles sold out in 112 minutes.

“We’re glad to say that the feedback has been extremely positive and we are very excited that Supernova is now available to buy at retailers.

Sold out in record time

“Ardbeg is already famed for its peaty smoky flavour. For the creation of Ardbeg Supernova, we analysed and tasted a wide range of different Ardbeg whiskies of varying ages.

“We were looking for something that would deliver an incredibly peaty, smoky flavour, but, most importantly, would also give us the breathtaking balance and complexity for which Ardbeg is renowned.”

“With Ardbeg Supernova you have nothing less than a “galactic explosion” of flavours, with salt and pepper, roasted coffee, chilli, chocolate and hand-rolling tobacco all contributing.

“It is not surprising it sold out in record time.”