A SUICIDAL woman tried to open a door on a passenger aeroplane as it travelled at 32,000 feet. 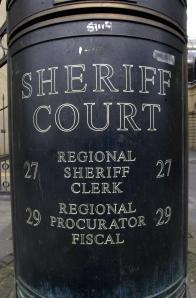 The pilot of the plane said Ann Gilmour’s bid to leap from the aircraft could have had “catastrophic” consequences for the 100 passengers on board.

Terrified cabin crew had to drag the 47-year-old from the door during the Air France flight to Edinburgh.

The Glasgow woman later told police she planned to jump from the vehicle because it would be “a good way to die”.

And at Edinburgh Sheriff Court she admitted culpable and reckless conduct after psychiatrists ruled she was fit to plead guilty.

Fiscal depute Alasdair MacLeod told the court how Gilmour had been a passenger on flight AF50554 from Charles De Gaulle Airport in Paris on January 7 this year.

But around one and a half hours into the 10am flight to Edinburgh a member of the cabin crew was horrified to see Gilmour clawing at the handle on an external door.

Mr MacLeod said: “At around 11.30am the aircraft was travelling at approximately 32,000 feet and was midway into the journey.

“At that time the cabin crew became suspicious when they saw the accused standing near to the front forward external door.

“One member of the cabin crew – Francoise Ulbricht- saw the accused hold onto the door handle and attempt to turn the handle to try to open the door.

“Miss Ulbircht pulled the accused away from the door and at that time she was very scared that the door could have opened.

“At the same time the captain of the flight was in the cock-pit and was alerted by a warning light that an external door had been interfered with.”

Mr MacLeod said the member of the cabin crew then told the pilot about Gilmour’s attempt to open the door.

The quick-thinking airman – Captain Guillaume Charvieux called ahead to authorities at the Scottish airport to arrange a police contingent to meet the aircraft as it alighted.

Mr MacLeod said: “The captain thereafter contacted air traffic control and requested the attendance of the police at Edinburgh Airport upon the aircraft’s arrival.

“A second cabin crew member – Maria Taunton – escorted Gilmour back to her seat and Gilmour started crying and told Miss Taunton that she had tried to open the door because she wanted to jump out of the plane and kill herself.

“Gilmour was placed in a window seat well away from the doors and the cabin crew kept a close eye on her during the rest of the flight to ensure that she did not get out of her seat.”

The aircraft arrived safely at Edinburgh Airport at around 12.20pm, Mr MacLeod said, and after speaking to both the pilots and the cabin crew of the flight police arrested Gilmour.

Gilmour said she understood why she was being arrested but made no reply. However during the short journey from the airport to St Leonard’s Police Station in the capital, she attempted to open the door of the police vehicle.

Mr MacLeod added: “She also told police that she had tried to open the door to kill herself.”

Gilmour went on to tell staff at the station that she suffered from depression and anxiety and added that she would try the same again and did not care about the safety of other passengers.”

Captain Charvieux told police that had the door been opened it would have been blown off by the “explosive depressurisation” and the aircraft would have been plunged into sub-zero temperatures.

Mr MacLeod said: “The captain was asked about the danger to the aircraft and he said it would have been possible for her to open the door as they are closed but not locked.

“The temperature at that height would have been minus 50 degrees centigrade and the aircraft would have taken considerable damage.”

Gilmour’s solicitor, Ronnie Renucci QC, said that at the time his client had not been conscious of the consequences for her fellow passengers but insisted it had not been a case of “air-rage”.

Mr Renucci said: “Although I accept that this was a serious matter with potentially very serious consequences this is a case that could be separated from an air-rage situation. There was no alcohol involved.

“Her intention was for self harm. Although she appreciates that there could have been serious dangers at that time she did not have regard for those consequences.”

Sheriff Isabella McColl deferred sentence for background reports and Gilmour, from Glasgow, will be sentenced later this month.

She will be held at Cornton Vale until then. 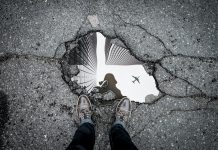