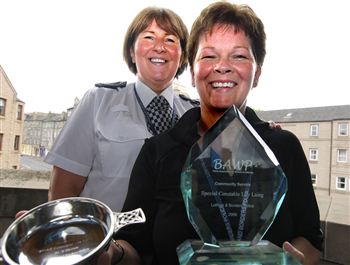 A SCOTS policewoman has beaten thousands of coppers from across the globe to be named as the world’s best community bobby.

Special Constable Lily Laing has been named Officer of the Year by the International Association of Women in Policing, and will receive the prestigious accolade for service to her local community.

The popular bobby’s international award follows on from her winning the British title in the Community Service category earlier this year.

The well-liked SPC will travel to Seattle, Washington, to receive the esteemed award in September.

Lily, who is based at Craigmillar, Edinburgh, has been with Lothian and Borders police for the past 12 years.

And despite bagging the top cop’s prize, bashful Lily was reticent about giving out her age.

She has proved a big hit with her community by getting involved with the area’s schools and actively engaging with local people to promote good citizenship and community safety.

Lily has also taken an active role in providing First Aid training to her fellow officers and has spent time working with various police departments where her energy and enthusiasm have been commended.

The modest copper was overwhelmed when informed of her prestigious accolade.

She said: “To be honest, I thought my chances of winning were a million to one, and even when they called to tell me I had won I couldn’t quite believe it.”

And despite her achievement, Lily refuses to take all the credit for what she insists is the result of a team effort.

She said: “I am just one individual who is part of a bigger team, and I would never have achieved this if I didn’t have the support of fellow officers and the community, who have allowed me to engage with them.

“I’d like to thank my colleagues who put me forward for this award, because I know they put a lot of hard work into my nomination.  I am delighted to have won, and very grateful to everyone who has supported me.”

Superintendent Lesley Clark, south and east area commander for the City of Edinburgh, was full of praise for Lily, and what she has achieved in her time as a Special Constable.

She said: “Lily is an integral part of the team here, and her achievements serve as an excellent example to anyone thinking about volunteering as a Special Constable.

“The hard work and dedication she has shown down the years is fully deserving of international recognition, and her continued energy and enthusiasm pay testament to her ongoing commitment to her role.

“Lily is very well thought of, both within the police and the wider community, and everyone is extremely proud of her latest achievement.”