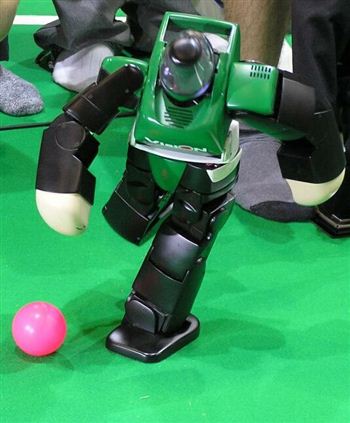 FOOTBALL daft boffins were studying last night’s Champion’s League final for tips on teaching their robotic dream team on how to milk it like Messi or roll like Ronaldo to gain an advantage on the pitch.

Diving to con the referee is commonplace in football and now the robots are being shown how to copy the game’s biggest fakers.

The mechanical stars of this year’s RoboCup will be tumbling like Tevez to help ease their way to victory.

And their creators will have been glued to the Man Utd v Barcelona match while training for the annual RoboCup this summer, when 2,500 scientists from 36 countries will clash Austria.
Their long-term goal is to defeat the human world champion team by the year 2050.

And the Chilean robo-squad’s manager Javier Ruiz-del-Solar of the University of Chile in Santiago says winning would be impossible unless soccerbots can learn to fall over without damaging themselves.

After studying real life footballers, the scientists ran a robot through a series of different fall sequences, analysing the impact stress on each of its joints.

They found that – just like a diving Ronaldo – the best way to minimise damage is for the robot to throw its legs into the air while falling.

For the RoboCup Humanoid League, Ruiz-del-Solar is planning to load his soccerbots’ memories with five different fall sequences, to be triggered when the robot is fouled or needs to dive to save a shot on goal.

He said: “Another good strategy is to use a fall sequence consisting of several movements, so the falling body has several points of contact with the ground, spreading the energy of the impact over a large number of joints, rather than taking it all in one disastrous crunch.” 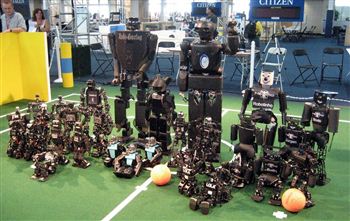 He hopes the experiment could be applied off the pitch too, in the development of cybersuits and robot legs to help elderly and disabled people to walk.

He said: “At present if someone tripped in a cybersuit they would fall heavily and sustain injuries.

“Improving the technology could make a fall less harmful for anyone wearing such a suit.

“What we need now is a good method for getting up gracefully.”