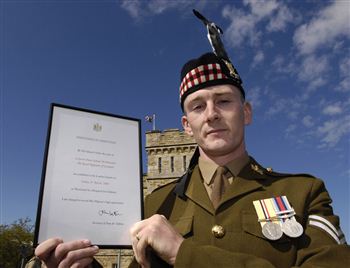 A HEROIC soldier has been commended for his bravery and courage while serving in Afghanistan.

Corporal Dean McMenamin, 22, was serving in the Royal Highland Fusiliers 2nd Battalion The Royal Regiment of Scotland when they were ambushed by Taliban soldiers.

But despite being showered with bullets and mortar from the enemy – some just 10 metres from him – the brave soldier leapt from the armourer vehicle to launch a missile and allowing the team to withdraw safely.

And yesterday his efforts were honoured by Major General Euan Loudon, the Battalion’s Representative Colonel.

He was awarded the Mention in Despatches commendation in a ceremony at Glencourse Barracks, Penicuik yesterday (Mon).

The modest soldier, from Pollock in Glasgow, told how his automatic reaction to a dangerous situation was what saw him receive the honour.

He said: “We were on patrol and we were ambushed by about 150 Taliban soldiers.

“Our vehicle was getting smashed – we had flat tyres and everything because they kept shooting at us. We called in air support but we had no way of knowing the exact position of our enemy.

“We can’t fire missiles from inside the Mastiff because of the blow back, so I jumped out. I was getting bombarded but I only had four minutes to get that missile away so that’s what I did.

“I’m so surprised I made it out alive.”

He added: “This award means a lot to me. I’m really chuffed.

“I didn’t think much about doing what I did. I just went and did it, and I was too full of adrenalin to think about being scared.”

Others awarded in the prestigious ceremony, which included a demonstration by the Battalion’s pipes and drums, included a Commander British Forces Commendation for Corporals James Elliot and Ian Anderson, Warrant Officer Barry Lynn and Colour Sergeant Thomas McBride.

A Chief of Joint Operations Commendation was honoured to Fusilier James Young and Colour Sergeant James Stevenson for their help in supporting the battalion.

Major General Euan Loudon said: “This was a difficult and demanding tour for the battalion, and many went above and beyond the bravery needed for operational service.

“These awards are so important because they inspire a standard to work towards – and although one individual is congratulated, we see a collective pride among the men because they work as a team.