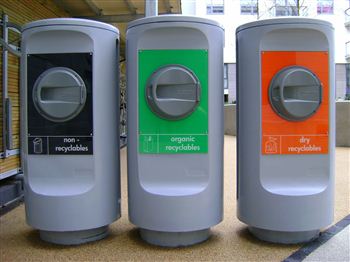 Council leaders in Edinburgh say fitting the £25million vacuum-powered rubbish chute would keep Princes Street litter free and is one of a range of eco ideas being looked at.

The ambitious scheme would end street sweeping and see pipes laid underneath Princes Street to suck away rubbish from shops and offices at speeds of up to 50 mph.

The move is designed to try and cut the number of refuse lorries that service the Rose Street area, directly behind the historic thoroughfare.

And it is thought the scheme, which could cost upwards of £25 million to install, could take up to two years to complete.

The vacuum waste system has already been installed in parts of Barcelona’s historic streets and made its UK debut in London last year.

Council chiefs are also thought to be looking at ways to reduce heating costs in the city by installing a “heat recovery” system, which would capture hot air from buildings on Princes Street and use it to heat water in heating systems.

Rob Winter, of the Princes Street Traders’ Association, said: “At the moment we have some shops using the council and some using private suppliers to deal with waste, and when you add that up it is a lot of arrangements and lorry journeys.

“A lot of larger shops are already looking at how they deal with waste from an environmental perspective, but also the fees for collection are increasing all the time.

“If a system can be developed that is simple, easy to install and offers genuine cost benefits, then I think people will go for it.”

The vacuum system has been trialed in London where 700 homes in Wembley have their waste deposited into a central container.

It is then safely collected by council waste lorries in less than three minutes.

As well as reducing the number of collections, the vacuum system compacts the waste at its central point, saving space.

Council bosses are also considering new proposals which would see all deliveries for stores on Princes Street dropped off at a central point on the edge of the city. The supplies would then be put onto one lorry to cut out duplicate journeys.

A spokeswoman for Edinburgh Council said: “We are investigating this innovative system for managing city-centre waste.”