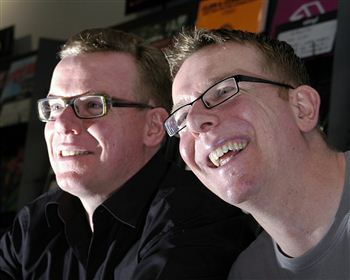 SINGING Scots twins The Proclaimers have revealed they once came close to blows after a gig.

Lenses went flying as the bespectacled duo fell out and had an offstage battle following a concert in Canada.

But siblings Craig and Charlie Reid, both 47, say it only took one beer for them to iron out their differences.

The “500 Miles” stars launch their new album, Notes and Rhymes, today (Monday) – the eighth of their career.

But they revealed in a weekend interview that they’ve not always been completely in harmony.
Craig said: “A few years ago we were opening up for the Canadian band Spirit of the West in Vancouver.

“I dodged out of the way just in time. But it blew over quickly.

“Spirit of the West had asked us to do a song as part of their set, so 20 minutes later Charlie and I were standing at the side of the stage having a beer together.

“That anecdote probably best sums up our relationship.”

His brother Charlie claims they both have an “aggressive” streak, but Craig says spending time APART is the key to their success.

“We both have families now and have lived apart for more than 20 years.

“When Charlie and I are at home we try and spend time with our families rather than each other. We are together so often when we’re working, so when we have time apart it is a relief.

“When we are relaxing we don’t really need each other’s company.

“If there was something that really got my goat about him it would be difficult to make music together.”