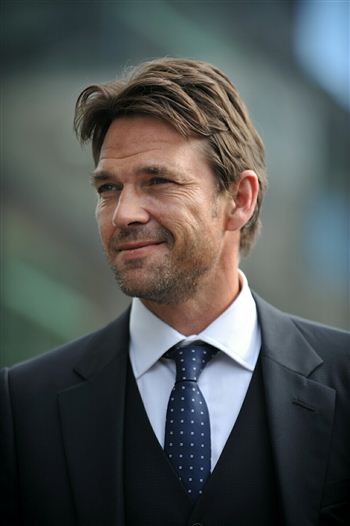 DASHING Dougray Scott says he will never get Botox and is “shocked and appalled” at his fellow male actors who have.

The Scots-born Hollywood hunk’s chiselled good looks have seen him grace blockbusters across the globe, having starred in Mission Impossible II and Desperate Housewives.

But the 43-year-old star says he’ll never change his appearance just to progress his career.

He slammed the number of vain actors who have gone under the needle to try and look better.

And Scott, once tipped to become the next James Bond, says women are under “obscene” pressure to maintain their youth under any circumstance.

He told a weekend interview: “See the amount of actors who have had Boxtox, it’s unbelievable.
“I can’t understand how guys could do that.

“I can understand with women, who are almost expected to be beautiful to the day they die, which to me is obscene.

“But guys doing Botox? What the f*** is that about.

“Nothing moves, there’s no movement.”

Fiercely proud of his home nation, where he shot new credit crunch thriller New Town Killers – released last week – Scott is also too proud of his handsome looks to get any cosmetic surgery.

He added: “I think it’s a vanity choice. I’d be shocked and appalled if that was the case.”

Glenrothes-born Scott’s character Alastair Mackenzie goes on a killing frenzy in the Edinburgh-based flick, as he bribes a teenager into a sinister game of hide and seek.

As the boss of an “ethical finance” company, he turns into a trigger-happy debt collector, putting a housing estate mum through hell “just because.”

Set against the backdrop of the capital’s gloomiest streets, the heart in mouth thriller takes a stab at the credit culture which led to the downfall of banks like RBS.

And Scott, 43, said his love of the underdog fuelled his rage-filled performance on screen.

He said: “I wish we lived in a much more caring society but it’s a complicated world.

“My politics are obviously from perspective of the left, being born and brought up in Fife.

“It’s interesting to see what’s happened in the last ten years with Tony Blair and Gordon Brown and the way the downfall of the economy came about.

“But I think that’s the result of a cycle that happens worldwide, not just in our country.

“However my sympathies do lie with the underdog and I find myself being more and more drawn to being an independent when it comes to politics.”